Titus Kaphar is a black artist who doctors history paintings so they're not so quietly (or unquietly) racist anymore. He takes this, for instance, 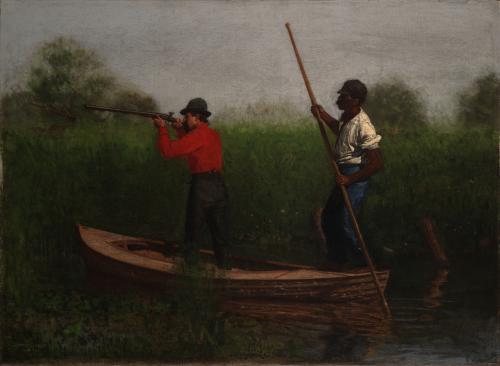 and turns it into this. 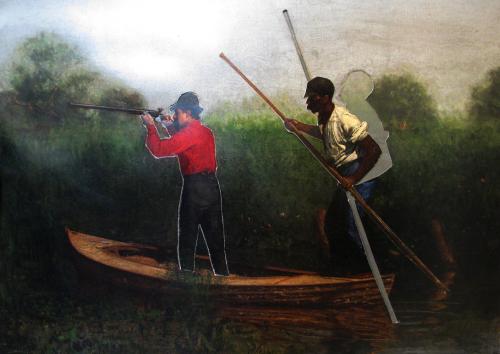 The original Thomas Eakins oil painting, Rail Shooting on the Delaware from 1876, is part of the Life, Liberty and the Pursuit of Happiness: American Art from the Yale University Art Gallery exhibition visiting Seattle Art Museum right now. (It's often cited as an example of a good, relatively equitable relationship between a black man and a white man, which Kaphar understandably finds a little hard to take.)

Kaphar made his response, Push Yuh Own Damn Boat, especially for the occasion of his simultaneous show down the hall at SAM.

The frisson of the direct response is powerfully specific, and its presence in the museum at the same time as the Yale show cracks open some of the under-explored issues in the history exhibition simply by inserting the doubt of an alternative perspective. Life, Liberty and the Pursuit of Happiness is richer because it shares a space with Kaphar, the history-painting explorer.

Kaphar is the first recipient of SAM's biennial Gwendolyn Knight Lawrence and Jacob Lawrence Fellowship, which is devoted to supporting black artists.

But it would be a mistake to see his work as limited to the context of race. Every cut he makes into one of his paintings—copies and interpretations of old European and American paintings—is different. He might cut out a woman to release her from the man she's standing next to; he might slice away a warrior and lay him on a pedestal in order to give the man some deserved rest; he might turn some figures toward the wall and others out into the room in order to engage with the basic questions of modernism in painting. He also uses tar to redact entire areas of a painting. 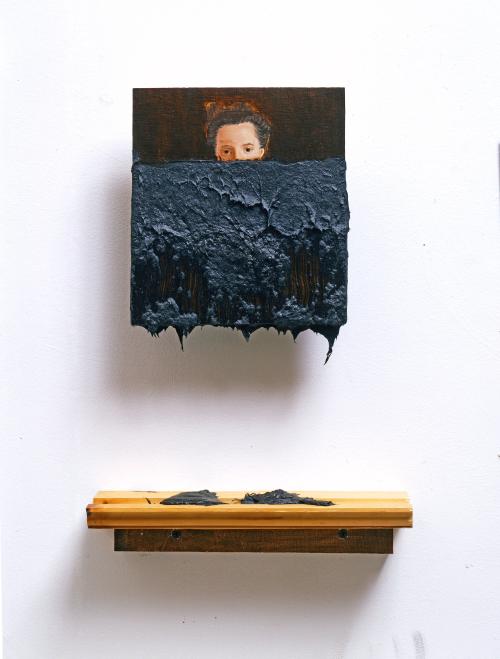 "I still don't know how it ended like this, but it began when one of the older women called her blackness into question" (2007)

How does Kaphar think about his own work, and how does he feel about being celebrated as a black artist? Listen in.