What Happens When Seattle Shakes?

We should probably talk about all these bricks. 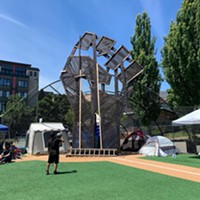 Raising the Fist at Cal Anderson

Slog PM: Three Stabbed in Downtown Seattle, Hellhole Opens Up in the Sky, Trump Can't Block Me on Twitter

We Have to Redesign Seattle's Ugly City Flag

Seattle needs a flag it can be proud of. We're throwing a contest to find a new one.

The Seattle Design Festival Thinks We Have Trust Issues

Texas Law: "Rent Must Still Be Paid on Damaged Dwellings"

by Cary Moon and Charles Mudede

What the "White Man's Fly" Tells Us About Intelligent Design

by Charles Mudede and Cary Moon

He was a designer, a musician, an illustrator, a painter, a husband, a father, and the art director of The Stranger from 2006 to 2015.

Housing Affordability Committee: Tear Down This Parking! (And Build Homes for Humans!)

10 Frames: A Selection of Shots from BadWill Market Pride Edition at Rhino Room

Guest Editorial: Can the Central District Become a Model for More Inclusive Development in Seattle?

James Keblas Thanks the Mayor for Firing Him, Takes Job as President of Creature

Door Not as Cool as It's Cracked Up to Be

The Version of the NYT Magazine HRC Cover with the Land-Mass Hair: Better or Worse?

We Feel Pretty! Oh, So Pretty!

An Ipsum for All Occasions

More on Why China Terrifies Us

The Problem with the Pride Flag

I Really Fucking Hope They Win

What Do You Think of the New DC Comics Logo?

Color of the Year

Possibly My Favorite Movie Poster Ever?

Good Luck with That

Probably Not an Equal Opportunity Employer...