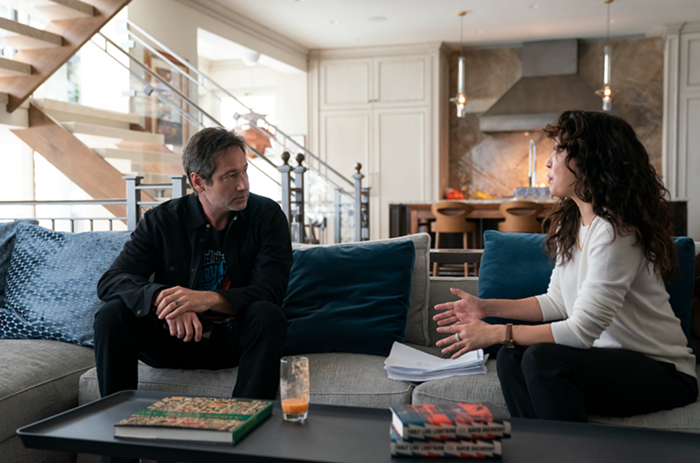 “No one gives a shit about Wallace Stevens and those other dead farts anymore.” Eliza Morse/Netflix

In the penultimate episode of The Chair’s first season, David Duchovny plays David Duchovny. The famous and rich celebrity also happens to be a novelist who studied literature at Princeton and Yale. The great dinosaur of the Western canon, Harold Bloom, was one of Duchovny’s professors during his postgraduate (and pre-X-Files) period. His paper “The Schizophrenic Critique of Pure Reason in Beckett's Early Novels,” makes an appearance in The Chair, playing the role of his character’s doctorate dissertation at Yale; in reality, it was his senior thesis at Princeton. It’s 160 pages!

Professor Ji-Yoon Kim (Sandra Oh), the head of the English department at the fictional Pembroke University, will have none of this. She does not want Duchovny to reconnect with his lost youth in academia by way of a “prestigious lecture series” offered to him by her higher-ups. Duchovny may get more “butts in seats,” but it should go to accomplished Black academic Professor Yasmin McKay (Nana Mensah), whose reputation is growing. Duchovny had his chance to become a serious scholar, but dropped it for a role in a pretty cheesy TV show driven by QAnon-grade conspiracy theories.

In what I think is the best moment in The Chair (Rich Smith and I reviewed the show here), Professor Kim confronts Duchovny about his lecture series. What value will it have? His whole preoccupation with modernism and the Bloomian canon is dead. The fictional Professor Kim asks Duchovny’s Duchovny: Does he know “[a]ffect theory, ecocriticism, digital humanities, new materialism, book history, developments in gender studies and critical race theory[?]” Also, when was the last time he even picked up an academic journal? Both Duchovnys seem to have no awareness of current literary theory and its diversifications.

The part that completes this moment, however, is when Duchovny is informed by Professor Kim that he wasn’t the first celebrity the higher-ups tried to push into the lecture series for more butts. The initial offer went to Dr. James Franco, Ph.D, who, unlike Duchovny, completed his dissertation at Yale University; next was Ethan Hawke, a mediocre novelist whose education in literature was provided by the Welton Academy, an elite Vermont boarding school famous for its Dead Poets Society.

The hurt, fictional Duchovny expresses that he actually has a pretty decent reputation as a novelist. In fact, his fourth novel, Truly Like Lightning, received a lot of praise.

“Truly Like Lightning,” his fourth novel, is another left turn: a stab at a hefty, Tom Wolfe-style social novel that wrestles with big themes. But his most complex novel is also the best of the batch, and makes a solid case for him as a real-deal novelist. It’s a provocative, entertaining book that, much like Wolfe did, exposes our collective foibles and makes everybody look a little cartoonish. But it persuades you that we deserve the caricature he’s made of us.

(I have not read Truly Like Lightning, but I did once try to read Hawke’s The Hottest State. That novel is truly bad.)

Duchovny’s latest work, The Reservoir, published by the radical Akashic Books, is about a “Wall Street veteran” who, of course, goes insane. His previous novel was about a Hollywood stuntman who becomes a Mormon. It is clear that Duchovny is in search of The Great American Novel. This pursuit is much more realistic than the one that obsesses FBI Special Agent Fox Mulder.

The Top 42 Events in Seattle This Week