Is the Best Installation Near Seattle Art Fair Also the Worst Place to Get Married?

If you've ever wanted to have a shotgun wedding AND a celebrity wedding, then save the date at Mount Analogue for any day in August. Colleen Louise Barry

I met up with Mary Anne Carter of Party Hat and Colleen Louise Barry of Mount Analogue the day after Carter's actual bachelorette party. (Carter is marrying Stranger contributor Sarah Galvin on Saturday.) Over the course of that party there were, according to Carter, "three matching tattoos, two active pukers, and one concussion."

"I was involved in all of those situations," Barry says, pointing to a pretty significant wound on her forehead.

After we get settled, Carter and Barry immediately sink into the characters they've adopted for the purposes their month-long installation at Mount Analogue, which opens tonight for First Thursdays in Pioneer Square. The project is called, Destinations' Wedding Chapel and Wig Sales. (Yes We Buy Sell Trade Wigs) [Eds note: They don’t.]

So let me get this straight. You're turning your bookstore into a wedding chapel, Colleen?

Carter: As Destination the Elder, I’m in charge of buying, selling, and trading wigs. I’m also offering free marriage advice. I’ve been married nine times, and I love marriage. I just want to share my love of marriage with the world.

Barry: I don’t love marriage, but I do love brides. I’m 17. Destination adopted me and renamed me 6 months ago.

Carter: We met at a trade show.

So the whole installation is just you guys officiating random weddings in character?

Barry: Well, Rob is a pretty special part of the chapel.

Carter: Our book on Mapplethorpe would be called Just Kidding.

Barry: He and Patti were lovers.

Barry: Another big inspiration for the chapel was Danielle Steel’s writing desk. Have you ever seen it?

Yeah, it's created using giant replicas of her own books.

Barry: That's right. I would say our installation could best be described as a cross between Robert Mapplethorpe and Danielle Steel's writing desk.

Carter: We also have a gift shop, which will be useful for anyone getting married with us. We're calling it The Fantasy Shop: Where the prusuit (sic) of happiness is not a crime. “Glamour before Grammar” is the slogan of the shop.

Barry: We’re selling socks in case you get cold feet. Mints for 25 cents.

Carter: We’re also selling perfumes. We have Only She, which is based on Justin Bieber. Streak Ray. And My E.A.D.

What does E.A.D. stand for?

Carter: We have no idea. We bought them at the dollar store.

Carter: It’s a disco grotto. All of the stones are authentic geodes made of foam.

Carter: I should say we’re divorcée-friendly. First and second marriages in the space are free. You have to pay for the third one. But if it’s your first third marriage at our space, it's totally free.

Are these marriages official?

Barry: I’m ordained. But you have to get your marriage licensed.

Carter: We specialize in spiritually and "legally binding" weddings—whatever that means. If you don’t want to get legally married but you want to get spiritually married, we offer that. As a queer person who's getting gay married in three days, I've been hearing a lot of stuff. People say, "If you can get gay married, what's stopping you from marrying your horse? I say bring the horse! I think it’s wrong that queers can get married but people can’t marry horses.

Could you get a horse-bride into Mount Analogue? The entrance seems too small.

Have you all married anyone yet?

Barry: The grand opening is Thursday, and we have six confirmed couples already. If people are interested in getting married they can email themountanalogue@gmail.com .

Is the public invited to these marriages?

Barry: On First Thursday it'll be a free-for-all. We’re doing 'vow karaoke,' where people can recite real or spiritually binding vows to one another. But as for people who book an appointment to get married? Public viewership is up to their discretion

Carter: However, weddings may be recorded for quality assurance purposes.

Barry: I’m also really excited that this is our Seattle Art Fair show.

Carter: Yes, and we have a deal going on related to the art fair. Show your art fair pass for up to three free marriages and free mints. Otherwise the mints are 25 cents.

Oh, cool! What will be happening at Mount Analogue when there isn't a wedding going on?

Barry: We’ll be selling romantic books all month on the Mount Analogue side of things.

Barry: We hope the Shotgun Wedding Chapel in Pioneer Square is sweating it.

I bet they are.

Carter: Our goal is for Jeff Bezos to get married in our chapel. We’d also be flattered if Mike Pence got gay married there. And I should just add that, yes, we do celebrity weddings. For an extra dollar you can wear Prince Harry’s face when you get married. In that way, everyone can take part in a true celebrity wedding.

Why not have your own royal wedding? Colleen Louise Barry

Barry: It’s actually kind of sacred in a way.

Carter: Yeah, marriage is supposed to be sacred, but there’s the trashy gross disgusting part of the wedding industry. Our chapel is completely free. We’re entering the wedding industry with no motivation to make money (because we’re artists) and a pure desire to facilitate lasting happiness in whichever way our patrons choose.

Carter: And in our work in general, Colleen and I are always trying to subvert the Capital "A" white-wall art. And yet here we are showing one of the most famous photographers of all time, perhaps the most prized piece of artwork we’ve ever presented. And yet, Robert Mapplethorpe died young as queer artist and got elevated to this paragon of high art. But he was also just a punk artist who was just trying to fuck things up. This is kind of our chance to put him back in his original context. 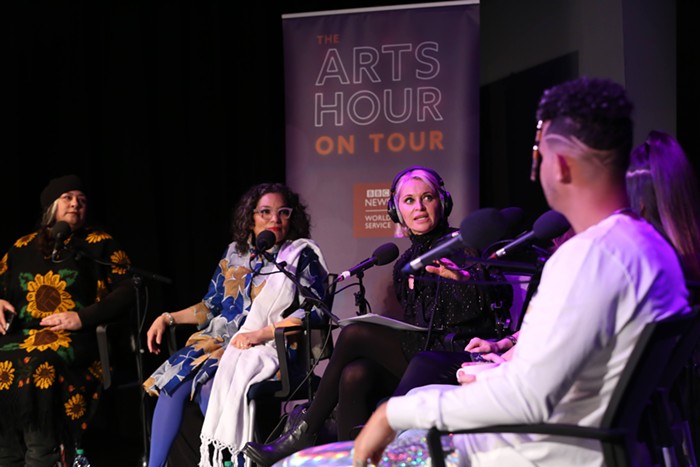