If You're Going to Try Drugs in College (and Let's Be Honest, You Probably Will), Here's What You Should Know 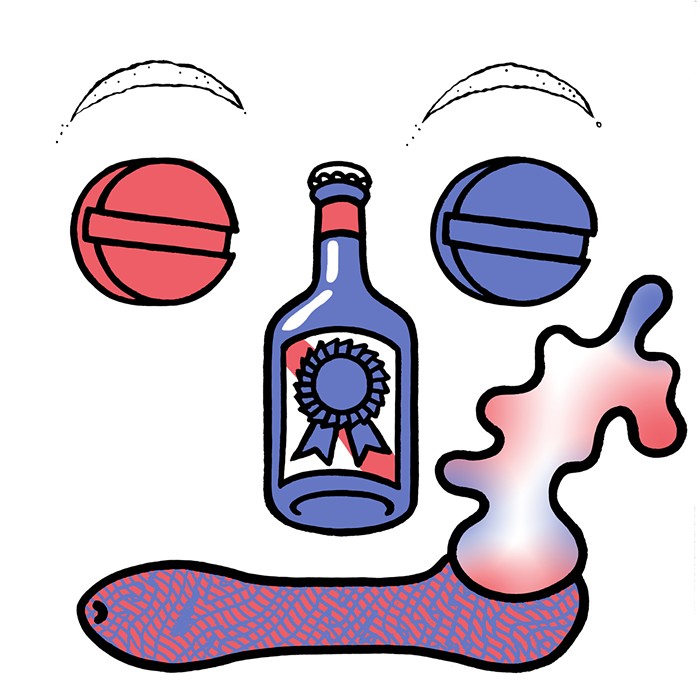 Over the next four to six years of your undergraduate experience, there are some things your professors can teach you, and there are other things they cannot—like how to do drugs. That's because drugs can ruin your life. But if you're going to do them anyway, no matter what anyone says, well, there are a few things you should know.

The most important thing to remember about substances is that the less you use them, the better off you'll be. Everything gets tedious when you do it too much, especially drugs, and the more frequently you use them, the more likely you are to develop a problem. You may think you're invincible now, but—this is the most important lesson I could ever hope to impart—you ain't special, kid. Addiction will sneak up, grab you by the back of the neck, and shake you until you are shivering and raw. It will easily derail this promising life of yours.

So with that in mind, don't do drugs... often. Do them rarely. And the rest of the time, live a life that is full and busy and interesting enough so that you don't need them.

Booze is probably the easiest drug to procure in college, but it's also one of the most deadly. Sure, drinking can be fun, but according to the Centers for Disease Control and Prevention, there are 2,200 deaths from alcohol poisoning in the United States each year. Dying isn't all you need to worry about: There's also sexual assault, which is far more likely to happen if you or the people around you are drinking.

If that weren't enough, drinking (to excess) almost guarantees that you will severely embarrass yourself sooner or later. Here's a short list of things Stranger staffers have done under the influence of alcohol: burned down a porch; peed on a friend's laptop; unintentionally became the meat in a closeted gay sandwich; broke into a house and stole a kilo of weed; "freed" the cattle on a ranch in Mexico; passed out at a bus stop; passed out in a cab; passed out at the front door, keys in hand; broke two front teeth; barfed in a (full) kitchen sink; climbed an 11-story crane; fled the police, both on foot and in a vehicle; and called the publisher of The Stranger "baby" at a holiday party. There's much, much more.

If you drink, you are sure to have stories like this soon enough, but please try not to kill yourself or anyone else: Don't drink and drive, ever. Don't leave a passed out person lying on their back, or they could choke to death when they inevitably start barfing. And always say no to Jägermeister—it will not end well.

All drugs are not created equal, and hands down the number one best drug that's sprung from the earth's sweet breast is good old finally-fucking-legal weed. Unlike some of the other baddies on this list, weed will not kill you. You could house a Dirk Diggler–size joint full of the strongest stuff on the market and you'd just fall into a deep, dreamless sleep and wake up with Doritos in your hair. Plus, no hangover!

Now, there are some buzzkills (doctors) who say that you should avoid consuming cannabis until the age of 26. Apparently, starting any younger can lead to a decline in cognitive function or something. That may be true, but personally I started smoking weed at 12 (and still have what some might call a "daily habit"), and yet I still manage to pay my bills and show up for my job rubbing sunscreen on Dan Savage's shoulders every day. You'll probably be fine.

Nevertheless, you have to be 21 to buy it in stores here. And weed isn't great for your memory, so you probably shouldn't do it on school nights and definitely not right before taking a test (unless you're in art school).

Once upon a time, LSD was prescribed to an estimated 40,000 medical patients for everything from autism to alcoholism. Then came the Nixon administration, which criminalized the drug, ending all medical use and even research into this strange psychedelic substance. This was, clearly, the worst thing Nixon did. Today, however, there's been a resurgence of interest in LSD, as well as psychedelics like magic mushrooms and ayahuasca, which is used in traditional shamanic ceremonies in Peru and Brooklyn. Recent studies have shown that hallucinogens—specifically psilocybin, the active ingredient in mushrooms—can lead to powerful, life-changing experiences, especially in people dealing with cancer and other traumas. To which I say: Duh?

But should you do hallucinogens? Maybe! Tripping is super fun and can also make you feel like you've tapped into some cosmic truth that you'll probably forget as soon as the drug wears off. If you do try hallucinogens, however, be cautious: That hit of acid you got in line for the Honey Buckets at Bumbershoot could actually be something far, far more dangerous (see: n-bomb). Thankfully, there's a small local operator called Amazon dot com where you can purchase LSD-testing kits. So if you do hallucinogens, don't be dumb about it. Test your drugs, trip with people you trust, and remember: Everything is an illusion, nothing is real, and it is never a good idea to call your mom on acid.

Oh, and LSD and mushrooms—along with almost everything else on this list—are still very much illegal. Getting busted could mean a big old felony conviction and even jail time, which will not be great for your academic career. Godspeed!

Amphetamines were made for college students. For one thing, insurance covers the legal ones (Adderall, Ritalin, Vyvanse), which negates the need to visit your roommate's shady cousin in Renton. Plus, they are performance enhancers of the first order, which you're probably going to need this year. Gotta get those A's! That said, both prescription amphetamines and the kind you get at shady apartment complexes in Renton can be terrible for the body and the mind, and the side effects include agitation, diarrhea, heart palpitations, and talking too damn much.

The same is true of cocaine, which isn't technically an amphetamine but has similar effects. (Plus it lasts for only 15 minutes and will disintegrate your nasal passages if you do it enough.) A word of warning: There is no hangover like a cocaine hangover. What felt fantastic on Saturday night will feel like near-death on Sunday morning. Also, it turns people into douche holes (without them realizing it), so avoid it if you like your friends and want to keep them.

As for meth, it is one amphetamine you should erase from your to-do list right now. It's literally cough syrup cooked with battery acid, drain cleaner, nail polish remover, lantern fuel, antifreeze, and matchbooks, and the process makes more toxic waste than it does drugs. Don't put that shit in your body. Ever.

People really, really like this drug, probably because it feels like you're lying under a pile of warm laundry on a cool day and your crush just asked you out and you're on a bunch of fucking drugs. It's nice—until it wears off, at which point your brain is depleted of feel-good chemicals like serotonin and you'll want to crawl into a dark hole forever. Worth it? Maybe. But the chance that any of the MDMA you come across is actually MDMA is slim to none: Only 13 percent of MDMA seized and analyzed by the US Drug Enforcement Administration between 2009 and 2013 contained any MDMA at all. Most of it was actually weird shit like bath salts, which is a decidedly different experience, and one—along with spice, n-bomb, and anything synthesized in overseas laboratories and sold in corner stores—that I do not recommend. If, however, you want the genuine ecstasy experience, existential hangover and all, there are services like Ecstasydata.org that will test your pills for a small fee. Use them.

As you will soon learn, it's not exactly uncommon to see people nodding off or shooting up in doorways around here. All around the city, there are visible human reminders that drugs are bad and opioids are the worst. This message is reinforced when you hear about the "opioid crisis," which, according to every news network and semi-elected president in America, has swept up the nation in a wave of addiction.

Despite the near-constant news of this epidemic, some experts say that the hysteria around opioids is a lot of hype. According to Carl Hart, a drug researcher at Columbia University, the vast majority of opioid users don't get hooked. In fact, one comprehensive review of the research found that the number of people who develop an addiction after being prescribed opioids for pain relief is actually less than 1 percent.

At the same time, it's important to note that overdose deaths have, according to the CDC, quadrupled since the late 1990s, and today around 91 Americans die every day from opioid overdose. As Hart points out, most of those overdoses occur after mixing drugs. In 2016, for instance, a study conducted by the Department of Health found that 90 percent of fentanyl-related deaths in Washington State involved at least one other drug. Nearly 75 percent of heroin deaths involve more than one substance as well, including alcohol or benzodiazepines like Xanax, Valium, Klonopin, or Ativan.

Of course, zero overdose deaths is the goal. The best way to prevent them, according to Shilo Jama, executive director at the People's Harm Reduction Alliance, is ending the stigma around drug use as well as increasing access to mental health care, drug education, and Narcan, an overdose reversal medication that the PHRA distributes around Seattle for free. (Distribution locations can be found at their website: PeoplesHarmReductionAlliance.org.)

Given all that, should you, college freshman, dive into the wild world of opioids? No. For one thing, they make you constipated. Plus, you have no idea what you're actually getting when you buy these drugs on the black market. That "pure heroin" could actually be mixed with a bunch of other shit, and until we have anonymous, free, and immediate drug-testing services, the risk of death is just too great. If, however, you decide not to take my advice, or you are already on opioids, the most important thing to remember is this: Mixing opioids with other substances (including booze, benzos, or even Tylenol) can and will kill you. And that's no hype.

Comments 2
Tags: Back to School Back To School 2017