Blood, guns, killing, yawn. So many video games pile on this heap, and usually, we're better off replaying the old greats—Half-Life 2, Far Cry, Call of Duty 4, even Goldeneye. You're putting me in a first-person view and telling me this is worth another $60? Get out. My broke ass is off to the bargain bin to pick up a better, older game instead.

Yet I'm willing to concede that two shooters break out into the top tier this season—though both require that you have friends. Worry not, loner Sloggers! These are worth the social anxiety. 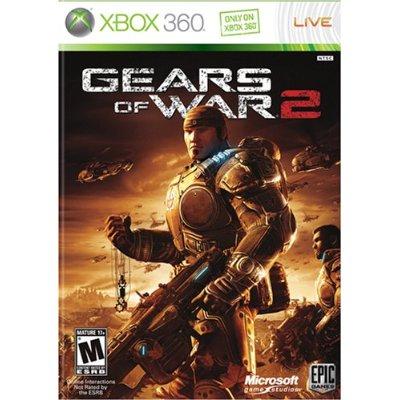 Gears of War 2 (Xbox 360) isn't an obvious innovator. I got more than a few angry texts from Jonah after he cleared through the game's default campaign and immediately sold his copy in frustration. "It's forgettable," he repeatedly complained. And he's right.

Just like last time, the focus here is on duck-and-cover moves (and it's still the best game out there with this mechanic). You hide behind barriers and work with a squad to flank enemies, winning as much with firepower as with position. But contrary to the hype machine that built this Gears as a more epic, varied campaign, these firefights are often more straightforward than last time. Many of the maps don't encourage flanking, so you instead run in a straight line, and in multiple missions where you fight from a moving car, you're forced to sit still and mindlessly hold your trigger down. There's little three-dimensional sense to most of the combat, as you're instead holding back lines of enemies from a distance (even when doing co-op with one friend).

Worse, cinema scenes stretch on while mining the usual action-movie cliches—loss of family, questionable orders from government, surprise deaths, "mature" cussing—with neither a sense of humor nor an attempt at believable humanity. Are we supposed to laugh? Should we invest in these characters? Neither extreme gets consistent treatment, and while plot's never the make-or-break point in a shoot-'em-up, the endless, worthless cinema scenes don't help the "forgettable" accusation we're levying.

So, uh, why the recommendation? Take this sucker online. The first title's multiplayer was an afterthought, but here, the battle modes are incredibly varied, and the gameplay is tuned to perfection. A few creative twists on capture the flag round out much of this mode, and the competitive stuff finally feels like what the game always aspired to be—a virtual paintball war. But what has gotten most people excited is the "Horde" mode. In this, your five-man team picks out positions in a big level, then battles an onslaught of computer-controlled baddies that grows tougher with every "wave." This is what the campaign mode should've been—an increase in teammates, not in cinema scenes, and level design that accounts for the team size. This is what feels epic. This is what's memorable. Way to sell your copy, Jonah.

But why wait for the next eventual Gears to get it right? Left 4 Dead (Xbox 360, PC) is already a lengthy co-op game obsessed with that "Horde" mechanic, and it's edging toward game of the year status as a result. (Reasons why are after the jump.) 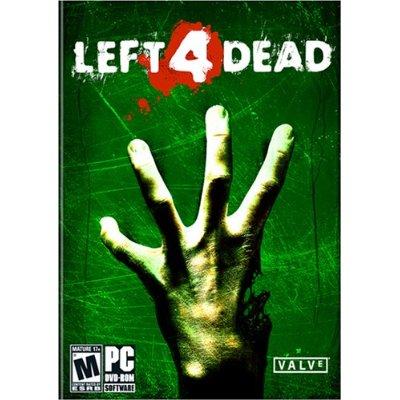 Bonus points already—no plot! Instead, you're thrown into one of four stereotypical zombie-movie scenarios (an abandoned town, the wilderness, etc). After watching an intro video, your foursome is told to run to a safety point, fending off "infected" along the way. These are 28 Days Later zombies, by the way. They run, they scream, and they usually roll in packs of at least 20.

L4D is loaded with memorable moments, but the most impressive come when 30 or 40 zombies run at your crew, their arms flailing, their cries growing in the distance. No shooting game has delivered this level of mass enemy terror since Doom, and while newer games since have tried copying the original, L4D's the first to outdo it in terms of sensation. The atmospheric lighting mixed with spaces of utter darkness; the randomization of where a zombie crowd will appear every time you play; the speed and numbers; the way these crazies' arms and legs and faces contort at will in a swarm; the best art direction yet in a Valve game; the terrifying triggers of new swarms, like when you set off a car alarm and know what's coming. A good game will have you yell "oh, shit" when such challenge approaches; a great game can repeat that sensation so many times, it replays in your dark-pink eyelids.

And because of the way enemies approach—in huge numbers, but weak individually—the co-op aspect really works. The way I see it, this is a rare feeling, because most "co-op" games run in parallel—your friends are having solo experiences next to each other with occasional, token gestures. Ho hum. But here, the experience is perpendicular. You need four guns working these weak masses down. You need a point man on your six to keep an eye out for the next randomly generated wave. You need help when super-zombies pop up in the crowd and render a player useless for a few seconds. You need cover when you have to reload or apply a bandage to yourself in the middle of a firefight, else you die.

Yet none of these moments feels forced or tacked-on; they're indispensable because of L4D's panic, and the game makes it easy to find teammates in the crowd by color-coding them. When your friend shouts that he's being choked by a Smoker, you can see his glowing outline, even if he's far away; this not only makes it easier to find the guy but also encourages him to shout for your help.

Getting everyone into the act is the most crucial part, and it's not just the atmosphere that nails it; L4D is perhaps most astounding at how it brings new people into the fold. Inexperienced teams will have their difficulty auto-adjusted, and being able to save each other's hides makes it less intimidating for stragglers to keep up. In all my playtests so far, the newcomers have probably been the most stricken by L4D. (Even ol' Jon Golob came along for a test, having never played a computer FPS before, and he left the session babbling like a fool, craving more.)

Versus mode is the same as single-player, only the humans' opponents control super-zombies. They die easily, and they have to wait forever to come back to life, but they can see through walls and try to catch the humans off-guard. Sneak behind and pick off a straggler? Find a hidden cache of dozens of normal zombies and wait for an assault? Wait for a Boomer to barf, thus blurring everyone's eyes, and then ambush? Get all four super-zombies together for an Abbey Road-style walk? It's a weird combat mode, but leave it to the folks behind Team Fortress 2 to make this versus mode stand out in a crowded market.

L4D has only four campaigns, each split into five chunks. That's not long, so Valve expects players to replay each campaign again and again, upping the difficulty with every retry and being continually surprised by the game's "Director," an algorithmic system that randomly creates enemies and encounters every session.

This approach originally seemed funky, but Gears 2's "Horde" mode is even more limited, asking players to bunk down in a particular map and master it through dozens of enemy waves. And people are eating that up. Bellevue's Valve Software outdoes Gears 2 by creating pacing and momentum with their worlds—the abandoned city, the expanse of non-linear farmland, the bloodied airport. Loaded with bottlenecks, wide-open spaces, time-sensitive stakeouts, and hidden nooks that contain either ammo or death, these worlds are worth studying and memorizing for future run-throughs. More new campaigns may come in the future, as Valve's been known to give out free updates and allow user-made mods (Counter Strike, Team Fortress 2).

The game is perfectly playable by yourself or with just one friend (though split-screen on a single Xbox 360 is a bastard to get used to). AI teammates are serviceable enough, helping you out and staying alive. But the computer can be boneheaded at the worst times, and that means the full game is nothing without a four-deep crew. No crew? No "game of the year." But even with strangers, L4D encourages you to make new friends in all of the right ways; as long as you can get online with a headset, you'll be terrified.

Comments 28
Tags: Blogs Games
The Stranger depends on your continuing support to provide articles like this one. In return, we pledge our ongoing commitment to truthful, progressive journalism and serving our community. So if you’re able, please consider a small recurring contribution. Thank you—you are appreciated!
CONTRIBUTE NOW