...and some people out there actually, kinda, sorta like us. I know, I know: it's enough to blow your mind, huh? It's also enough to get your artworks yanked from a student show at Utah's Brigham Young University. 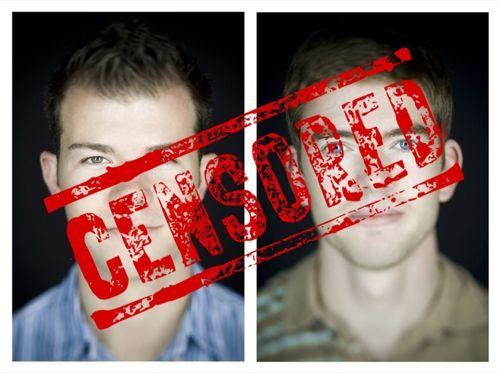 Apparently the topic of homosexuality is a bit much for the BYU audience and my part of our Fine Art Classes show was taken down today. It seems that censorship is favored over support and love. This really saddens me. I found out because a friend of mine went to the show and said that my peices had been removed and the show had been rearranged.

The show was rearranged so that no one who attended would realize that the works on display had been censored for political/religious reasons. So... shhh. Don't tell anyone.

The student artist took pictures of openly gay BYU students—openly gay and openly ballsy—and a companion portrait of a supportive friend or family member. The artist didn't label the portraits; you don't know who in each pair of portraits is the fearsome, terrible, ungodly gay, and who is the tragically deluded enabler of evil—excuse me, "the supporter." You can see the pictures without the big red "censored" here. But they deserve a wider viewing—hey, maybe the Salt Lake City Weekly ("We Not All Crazy Bigots Down Here, You Know!") could put them on its cover.

Comments 59
Tags: Blogs Homo Religion Queer
The Stranger depends on your continuing support to provide articles like this one. In return, we pledge our ongoing commitment to truthful, progressive journalism and serving our community. So if you’re able, please consider a small recurring contribution. Thank you—you are appreciated!
CONTRIBUTE NOW