I've been thinking the same thing as Dan's friend. Watching scenes like this over the weekend... 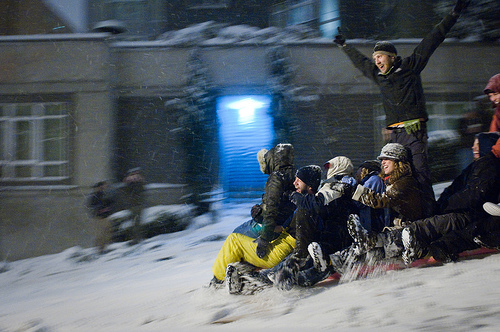 ...and wandering on foot in the streets of the city—literally in the streets, because why not when most cars are stuck somewhere?—it's hard not to notice the attitudinal shift.

The cars are humbled. The people are emboldened. The snow is deep enough that it blurs the point at which the curb ends and the car-space begins. Street life—by which we usually mean sidewalk life—is finally, actually, street life.

Maybe I've missed something in previous years living in this city, but it does seem to me as if Seattle—which has a rich, familiar culture of street protest—is now developing a new addition: a culture of street joy.

In both instances the the streets have been immediately appropriated for the purpose of joy—not commerce or commuting—and the Seattle police, who normally exist to protect commerce and commuting, have gotten it exactly right. They've ceded the streets to the celebrants and made it their duty to protect them and their temporary takeover of space that isn't theirs. On election night, I saw police keeping cars away from the street party in the above video. On Saturday night—or, really, at 2 a.m. on Sunday morning—I saw a lone police car parked so that it blocked traffic from descending the hill favored by the East Denny Way sledders, some of whom are pictured above.

It's messy, of course, this business of joy-ing in the street. The police aren't everywhere. And not everyone agrees on the new rules, or at what depth of snow they begin to be enforced, or how long after a snowfall the new rules should end. What we have is perhaps a kernel of a new Seattle tradition with a lot of chaos around the edges. And so, walking around, I saw a few scenes like the one in this video (a video sent, coincidentally, by the same YouTuber who captured the election night dance party).

Similarly, on Union Street, around 17th Avenue or so, I saw over the weekend something that seemed like a checkpoint one would find in a country with a heavy-handed military. Except that it was manned by snow-caked people in their 20s and 30s, some of them on a couch that had been dragged into the intersection, others standing near trash can lids and cardboard and other sledding materials. If a driver charmed the people manning the checkpoint, he or she could go through. If a driver didn't, or failed to stop and turn away as instructed, there was a somewhat good-natured retribution. A hail of snowballs. Shouts about how awful the driver was for messing up a good thing. People hanging on to the driver's back bumper and sort of water-skiing behind the car, heels gliding down the snowy hill.

A driver could disobey the new law of the snow-stopped city, but its enforcers wouldn't make it easy.

There is a lot one could connect to the street celebrations that Seattle has seen this November and December: The World Trade Organization protests of 1999. The rise of Seattle's Critical Mass specifically, and of local bike consciousness in general. The huge Prop 8 protest of mid-November. The anti-war rallying that's been done in various moments over the last eight years. The decline in esteem that the automobile, and its demands, are experiencing. The increasing density of the city, the support for this density from the political class, and the demands that people living in small, densely-packed neighborhoods feel compelled and empowered to make. All of this informs the current thoughts about who should control Seattle's streets—and when.

But making too many connections may be getting ahead of things. If this is indeed a new thing, a new way of clebrating in Seattle, we'll have to see what it becomes before we know exactly what it is. I, for one, hope it becomes something—something greater than two notable moments in the life of a city in late 2008. Because whatever's going on in this town lately, it's fantastic.