Rick Warren: Abused, "Miserable" Women Have "No Right" to Divorce 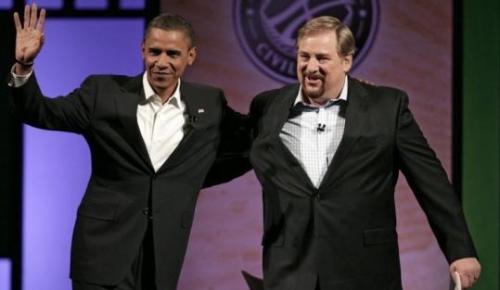 Also, members of other religions can't go to heaven, Jews are going to come around, and homosexuality is a "dangerous sin."

Some excerpts from sermons by Rick Warren, the homophobic, anti-choice pastor tapped by Obama to deliver his inaugural invocation.

On whether members of other religions can go to heaven:

Even those of you who have been believers for quite some time now are tempted to want to think, well, why wouldn't God let those people in? I know you feel that way; it's a tempting way to think in our world today. One of the reasons we're tempted to think that way is because we're tending to look more at this world and not enough at God and what he's really like. If we really understood God and how holy he is and how sinful we are.... we would realize it 's not a matter of comparing ourselves of, who gets in and who doesn't? It's a matter of the fact that we were so far, we were so lost, that we just have to pour our hearts out in gratefulness that God would reach his hand down in Jesus Christ and save us. All of the other religions of the world depend on people rising above other people, being a little bit better, having a few more good works. It's only in Christianity that you have God's grace being expressed in Jesus Christ... I don't think any of us will ever know what a terrible state we were in before Christ came to us... If Jesus Christ were not the only way to salvation, first of, all he would be a liar, because he said, I am the way, the truth, and the life. But second, God the father would be a cruel father. Why would God the father send his son to die on a cross if there were other ways to salvation? ... He sent his son to die because he's the only way to salvation. ... Human history is littered with those who have followed idols rather than the true God, so that's what most cultures have degenerated into. In the united states we don't have to worry about that as much.

On whether gay people can be members of Saddleback Church:

The Bible says he created man and woman to be together. God's ideal, God's design is for a man and woman to be together in a committed relationship, in a marriage. ... Anything outside of that design is sexual immorality or sexual sin. ... God says that all sexual sin is dangerous because it hurts our bodies, it hurts who we are. ... Once I become a believer and become a member of Saddleback Church, our commitment, our covenant together, is to live by the truth of the Bible. We've decided together that we trust God's word. ... That's one of the reasons that someone who is actively involved in sexual sin ... and refuses to say that the Bible teaches that it's a sin, is not a member of Saddleback Church. ... Now, anybody can attend... but to be a member is something special. Homosexuality ... is a dangerous sin. Why is it dangerous? Because God loves us and he's designed us in a certain way out of that love to live the kind of life he has for us.

On whether women can divorce an abusive spouse:

I'd always rather choose a short-term pain and find God's solution for long-term gain than try and find a short-term solution that's going to involve long-term pain. ... [In scripture] adultery is one [reason for divorce] and abandonment is a second. I wish there were a third in scripture. Having been involved as a pastor in situations of abuse there's something in me that wishes there was a Bible verse that says if they abuse you in this and such kind of way then you have a right to leave them. ... If you're in this kind of situation I strongly recommend that you take advantage of our lay counseling ministers.

On whether a woman has to stay in a "miserable" marriage:

The Bible answer is yes. Does God expect me to stay in a miserable marriage, and why would he do that to me? I often say to people when they're facing this decision, really, you're choosing your pain in this moment because it's going to be painful either way. If you stay in your marriage there is the opportunity for reconciliation and for the loss of pain, but there is going to be short-term pain on the way there. ... There is lifelong pain in divorce. ... I wish there was a way to say there is a choice here where you're not going to have pain but there is pain in relationships. Now, God understands that... He can be with us in our pain and he can comfort us, he can strengthen us, he can give us perspective. He can also give us wisdom. Does God expect me to live with this pain? No. I think he expects us to ask for wisdom to do the things that would cause the pain to begin to be solved. ... The Bible says the husband is to sacrifice for his wife and the wife is to respect her husband and if that doesn't happen you have the right to keep pushing for that.

On whether Jews can be "saved":

Jews and gentiles are alike. We come to faith the same way—through Jesus Christ... the Bible says there is going to be a great outpouring of faith among the Jewish people at the end of time. ... The Jewish people will recognize and come to him. ... They'll see he is the Messiah. They'll see the truth of who he really is. If you talk to someone who is Jewish you'll find that one of the real struggles they have is with the fact that Jesus claimed to be God... To understand the Trinity, that the father, son and holy spirit are one God, is a difficult concept. But when the Jewish people realize that Jesus is god... there's going to be this great outpouring of faith among the Jewish people. We're all saved the same way: through Jesus.

On whether Christians who commit suicide can still go to heaven:

The Biblical answer is yes... there is no sin you can commit that will cause you to not go to heaven if you've truly had an experience with Jesus Christ... That's not the end of the answer, though. ... I do know that some people commit suicide out of mental illness but someone who commits suicide not out of mental illness ... you'll go to heaven but you'll lose all kind of rewards.

Comments 88
Tags: Blogs Religion
The Stranger depends on your continuing support to provide articles like this one. In return, we pledge our ongoing commitment to truthful, progressive journalism and serving our community. So if you’re able, please consider a small recurring contribution. Thank you—you are appreciated!
CONTRIBUTE NOW