This is the gun that got University of Washington student Miles Murphy killed: 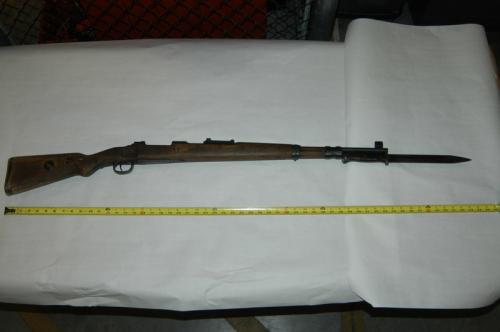 The Seattle Police Department held a press conference earlier this afternoon to talk about the events that led to Murphy's tragic death on New Year's Day.

SPD Chief Gil Kerlikowske said that as officers were taking up positions outside of Murphy's home, the 22-year-old man came out of his house wearing a German military uniform and pointed a Kar 98 bolt action rifle—which was apparently loaded with blanks—at officers.

Kerlikowske says officers, who were in uniform, ordered Murphy to drop his weapon three times. Murphy did not respond, and instead raised the rifle, pointed it at officers, lowered it, raised it again and stepped towards officers.

Two officers carrying rifles—Adam Elias and Kirk Waldord, who've been with SPD for 7 and 10 years, respectively—fired seven shots, fatally wounding Murphy. Witnesses had apparently told police that Murphy was firing blanks in an alley next to his home, however, Kerlikowske argued that “officers don’t get the option to believe everything they’re told by a witness.” He also stated that it is not department policy to use less lethal weapons like Tasers when a gun is involved. “It’s just not done,” Kerlikowske said, later adding that “’shoot to wound’ is purely myth.”

According to Kerlikowske, SPD previously confiscated Murphy's rifle in November 2006, but he would not elaborate on why. The rifle was returned two months later. The chief also noted that Officer Elias has taken an extensive deescalation course with the department and stated that neither officer has been involved a prior shooting. Kerlikowske believes "alcohol was certainly a factor" in the shooting and that officers made the right decision. Police found a box of live ammunition in Murphy's house after the shooting and detained two men for questioning. No arrests were made.

According to Murphy's friend Andrew Swanson, Murphy was depressed, but he doesn't believe his friend committed "suicide by cop."

"He definitely had his issues with depression. He was kind of a sad guy," Swanson says. "A lot of us are too, so we could relate to him in that way [but] I can’t say any of his emotional problems had anything to do with what happened."

Comments 107
Tags: Blogs City
The Stranger depends on your continuing support to provide articles like this one. In return, we pledge our ongoing commitment to truthful, progressive journalism and serving our community. So if you’re able, please consider a small recurring contribution. Thank you—you are appreciated!
CONTRIBUTE NOW