Why, why, why did I go ahead with that Google Alert for "feces"? 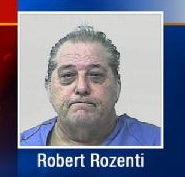 PORT ST. LUCIE, Fla. — Police said an elderly Port St. Lucie woman was so neglected by her son that her never-removed shoes had grown into her feet.

Port St. Lucie police were called to Columbia Medical Center on Saturday after paramedics found Anna Chuboff, 90, lying in the hallway of her home.

According to the police report, Chuboff told police she lived with her son, whom she said often yelled at her and uses the "F" word a lot.

Her son, Robert Rozenti, 68, was arrested and charged with neglect of an elderly person.

According to the arrest affidavit, Rozenti told police he and his mother do not have a good relationship and that he is her illegitimate son. Rozenti said he had not taken her to the hospital in two years and made no arrangements for any home nursing, stating that she takes care of herself and will not let him take care of her.

Police said her mattress had fecal stains on it that had not been cleaned, and the kitchen had limited food consisting of tomatoes, one package of sandwich meat, oatmeal and a few cans of soup.

I am sorry, unfortunate old lady, about your terrible "F"-ing son. Malnourished-permanent-feces-shoe-feet is no way to spend one's nineties. I hope you get a nice place to live now.

Comments 15
Tags: Blogs Life
The Stranger depends on your continuing support to provide articles like this one. In return, we pledge our ongoing commitment to truthful, progressive journalism and serving our community. So if you’re able, please consider a small recurring contribution. Thank you—you are appreciated!
CONTRIBUTE NOW