Originally posted last night and bumped up to this morning.

Obama choosing Seattle Police Chief Gil Kerlikowske to become the next drug czar in Washington, D.C., at first, looks like the same old beltway logic: cops and prison terms are the snake-oil cure for drug addictions. Some change, Obama. Right? 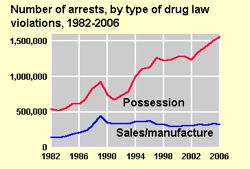 Under Clinton’s and Bush’s drug czars, the United States experienced the steepest spike drug arrests in its history (contributing to the fattest swell of anti-drug spending). Drug arrests jumped over 80 percent since 1992. And despite the effort, the White House reports that drug use has risen.

Graphic via the Bureau of Justice.

But Kerlikowske, since he became chief in 2000, has been at the police department's helm while Seattle made some of the most aggressive reforms to drug enforcement allowed under federal law. He never stood in the way. And now Kerlikowske is poised to become the most influential person in federal government to set new drug laws.

The needle-exchange test: The Obama administration has already identified this as its most pressing drug issue. Last week, Obama sent American negotiators to the UN orders to reverse Bush’s block on needle exchange. He wants to allow clean needles—in Europe and in the US. What's Kerlikowske's record?

“There has been long-standing support in the community as a whole and from SPD for our continued operation of the needle exchange,” says James Apa, a spokesman for Seattle King County Public Health, which runs one of first and the nation's largest needle-exchange programs. Seattle IV drug users have some of the lowest HIV-infection rates in the country, he says. But acceptance of the controversial program hasn’t been that long standing.

“What we would find is that police would hang around the exchange site and watch who came and went,” says Kris Nyrop, former director of Street Outreach Services, a pioneering needle exchange group that operated a table in downtown Seattle in the late 1980s. “Their presence itself would be somewhat intimidating ... people would see four police officers halfway down the block and they would turn around and go home,” he says. “Harassment like that happened routinely up until the mid ‘90s.”

But under Kerlikowske, “It has been a laissez-faire thing and the police basically leave needle exchanges alone,” says Nyrop.

Pot arrests have plummeted under Kerlikowske’s watch. When he took office in 2000, Seattle police arrested 332 people for misdemeanor marijuana possession (.pdf); by 2006, the number had dropped to 148. Some of that decline is likely due to Seattle passing Initiative 75, which made marijuana enforcement the city’s lowest law-enforcement priority. But Kerlikowske didn’t try to block I-75. While City Attorney Tom Carr joined Bush’s Drug Czar John Walters at a press conference to oppose the measure—and Carr campaigned against the measure for months—Kerlikoske was mum. And after voters passed the law in 2003, SPD told a City Council Marijuana Policy Review Panel that “officers [had] been verbally advised during their roll calls that investigation and arrest of adults for possession of cannabis intended for personal use is to be their lowest priority.” At Hempfest—where tens of thousands of people smoke pot in unison—SPD sergeant Lou Eagle told a reporter, "We are not out there to enforce the marijuana laws." And medical-marijuana patients, who could still be arrested despite the state’s medical-pot law, found Kerlikowske fair. Had Kerlikowske chosen, SPD could have maintained or increased pot arrests. But he didn’t.

In striking contrast, Walters’s number-one priority was marijuana. “[N]o drug matches the threat posed by marijuana,” his office wrote in a letter telling federal attorneys to ratchet up prosecutions (.pdf). And under Walters, the Drug Enforcement Administration and federal prosecutors made a point of busting medical pot collectives in California. But for Kerlikowski, pot was his lowest priority.

Hold on—Obama’s not about to legalize pot.

The bigger issue—and safer issue, politically—is replacing enforcement with public services. On that issue Kerlkowske has incubated a revolution. Seattle implemented two programs that get drug users off the street before they get arrested. Most notably, the Get Off The Streets (GOTS) program hatched in the Central District when Lieutenant John Hayes (now a captain) set up a table as an arrest-free area that people with criminal warrants could visit for health and human services.

“That was, at that time, a very edgy approach, and the chief was willing to let one of his people staff the program,” says City Council Member Nick Licata, who soon seized on the idea, passing legislation to fund the project permanently. “It was a stage where Gil could have stopped it from [getting funding], but he allowed it go forward,” he says.

“He’s not saying we should do away with the drug war, but I think he recognizes that it has not been a success and I think he is open to other strategies,” Licata continues. “That may be due to some of his experiences here. Seattle may get some credit for exposing him to real-time experiments, such as I-75, as to what could happen nationally.”

And nationally, Kerlikowske could be a drug czar who pushes to lift the federal ban on funding needle exchange, stops the medical pot raids in California, overhauls our nonsensical anti-drug commercials, and enthusiastically seeks funding for drug-treatment programs.

The brilliance of Obama’s pick for drug czar is not just finding someone who is open to new strategies, but someone who nonetheless holds undeniable qualifications as a cop. Nobody can claim Kerlikowske is a public-health nut who doesn’t know the impact of drugs on the streets. Like many Americans, he agrees that drugs should be illegal. But he understands the place for low priorities and public health—and he's willing to step back where enforcement alone has failed.

Comments 46
Tags: Blogs Drugs
The Stranger depends on your continuing support to provide articles like this one. In return, we pledge our ongoing commitment to truthful, progressive journalism and serving our community. So if you’re able, please consider a small recurring contribution. Thank you—you are appreciated!
CONTRIBUTE NOW