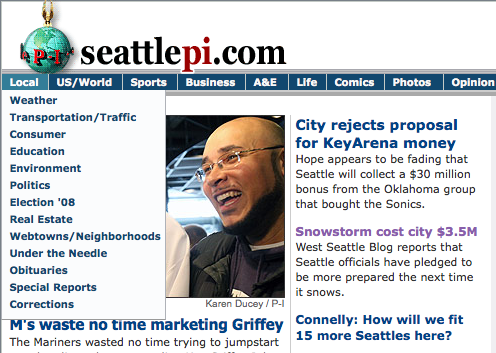 Did you see that the P-I's snowstorm headline (on the homepage) links directly to a West Seattle Blog story? Is this their new online plan? Yikes.

I'm working on a story for next week's Stranger about the P-I's online plan, but the short answer to this question seems to be: Yes.

Based on interviews with more than a half-dozen P-I employees, I'm now under the impression that the idea for the online-only P-I (an idea that, officially, is being discussed in only hypothetical terms until the paper edition likely ceases printing in mid-March) is one in which SeattlePI.com exists as a combination of link aggregation, blogging on subjects that tend to draw high traffic, and original reporting by a very small staff.

One can think of a number of sites that follow this model, some more successful than others. More on this in next week's Stranger. But for now, here's one of the ironies I'm considering: After so many years of newspapers harrumphing at aggregator sites and blogs for using (or "stealing," or "parasitically" exploiting) their original content, here's one major newspaper that may be about to reincarnate itself as, in part, an aggregator.