Someone Got a Photo... 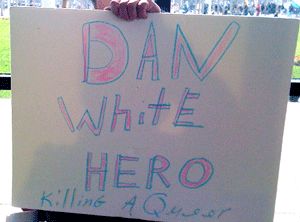 Equality California sent it out last night along with a fundraising pitch. "Imagine that kick-in-the-gut feeling I got when I saw a sign that said 'Dan White: Hero. Killing a Queer' in front of the Supreme Court building last Thursday," writes Equality California ED Geoff Kors. Then asks for a donation.

Because I'm a bad, bad man, I have some questions about this sign: Who took the picture? Where? When? Is the person holding the sign standing inside a building? Weren't the demonstrations outside? And who is holding the sign? Why is the picture cropped the way it is? Why was the person holding the sign cropped out of it? If someone was carrying that sign at the massive demonstrations outside the California Supreme Court's hearing last week about Prop 8, wouldn't dozens of people have taken pictures of it? Wouldn't it have been all over gay blogs and news website right away? Why did it take nearly a week for this picture—seemingly the only one taken of this sign—to surface? And it surfaces not on blogs or news websites, but in a fundraising email for the group that fatally mismanaged the "No on 8" campaign?

If we heard about a gay person carrying an outrageously incendiary sign at a large, public demonstration ("Kill All the Christians and Let God Sort 'Em Out!" or whatever) and a picture didn't surface until days later, and the person carrying the sign was carefully cropped out, and it wasn't entirely clear that the person carrying the sign was even at the demonstration, we would be skeptical, to say the least. We'd be screaming bloody murder, actually, and demanding proof. [The proof is in—see update, below.]

And speaking of fundraising and the "No on 8" campaign: Rex Wockner put a long and important blog post late last night about Equality California's current fundraising efforts.

This past Friday, Geoff Kors, executive director of Equality California, realizing that gays are likely going to lose the Supreme Court case aimed at overturning Prop 8, sent out a new fundraising appeal. EQCA, of course, was the public face of the No on 8 campaign and probably its biggest component.... this letter could be translated as, "Give us another $40 million, and trust us not to make a mess next time."

Kors is unhappy with me at the moment anyway, so what the hell. He says I wrongly blame EQCA for the lame, gay-free TV ads the No on 8 campaign ran. He wants folks to know that (a) he and EQCA were just one of many entities that made up the No on 8 campaign, (b) EQCA's main role in the campaign was fundraising, and (c) the No on 8 executive committee (which Kors was a member of) wasn't responsible for the ads, because it wasn't really involved in that aspect of its own campaign, because that aspect of its own campaign was handed over carte blanche to outside consultants, who did whatever they wanted.

Alas. It's not like there's a bunch of rival EQCAs out there to turn to. Or is there an option?

There may be. Instead of handing another forty million dollars over to the folks at Equality California—not just the same org that run the incompetent, clueless "No on 8" campaign, but the same folks (no firings? no accountability?)—Wockner suggests we take a look at a newly founded rival org, the Courage Campaign. Says Rex:

"[It] sounds like maybe the Courage Campaign gets it.... [so] you may have a choice of what to do with your money if you want same-sex marriage to return in California. You can give more bucks to the folks who admit they botched it (my story on that here and the Bay Area Reporter's story here) or you can take a leap to the only other group that's emerged on the scene, and give it a chance.

UPDATE: Slog readers deliver: the sign appears to be legit. Here's a picture of it—and the vile piece of shit waving it—at the actual demonstration... 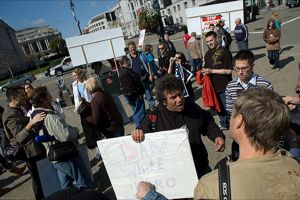 The picture of the guy was taken by me. Here is a link to the Photostream that has more pictures of him in it. I grabbed a Police Officer, advised him of the guy and what was on the sign and then he escorted him out.

Comments 97
Tags: Blogs Politics Homo Queer
The Stranger depends on your continuing support to provide articles like this one. In return, we pledge our ongoing commitment to truthful, progressive journalism and serving our community. So if you’re able, please consider a small recurring contribution. Thank you—you are appreciated!
CONTRIBUTE NOW