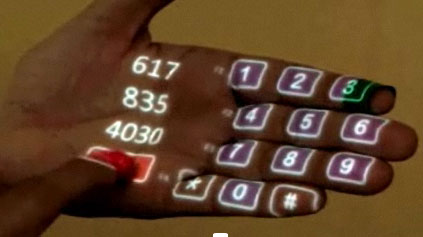 In 2006 Jeff Han demoed a multi-touch interface at TED, and the audience burst into spontaneous applause and cheers just from the sight of the thing. This was just about 3 years ago, and only 18 months before the first wildly successful consumer product (the iPhone) using similar technology was launched. Think about that—in less than two years, something that shocked and delighted the innovators of the world at first sight was in the consumers' hands, and now we're so used to it that we nitpick the hell out of it.

Well, there was a similar demo at this year's TED conference when Patti Maes of MIT's Media Lab demonstrated a gadget they're calling "Sixth Sense." Think Minority Report, but on any surface, and you know, REAL.

Want to know the time? Draw a watch on your wrist. Want to make a call? Create a keypad on any surface and dial away. Get online reviews of products in the store just by picking them up. The major innovation (other than the software, which would be the main component) is that you don't need a screen, you put a screen wherever you need one. This is genius. You don't need an electronic newspaper tablet, you just project the newspaper onto your desk, or your hand, or your sleeping darling's back. Everything becomes interactive, lives change, spam everywhere.

The prototype was built with $350 in parts from Radio Shack.

Comments 30
Tags: Blogs Tech
The Stranger depends on your continuing support to provide articles like this one. In return, we pledge our ongoing commitment to truthful, progressive journalism and serving our community. So if you’re able, please consider a small recurring contribution. Thank you—you are appreciated!
CONTRIBUTE NOW