We Should Pass (Most of) the Housing Levy

Property taxes that go toward building and maintaining affordable housing would increase by 61 percent—up to $79 a year—for the average Seattle property if voters pass a proposed housing levy this November. That’s less than the alarmist “nearly double” that the Seattle Times reported earlier this morning before removing the statement from its website. 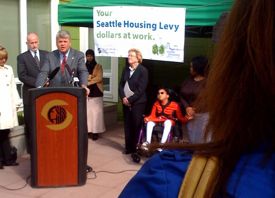 Mayor Greg Nickels’s proposal would maintain the same level of housing assistance as the previous levy in 2002, he told reporters outside a Wallingford apartment building constructed with levy funds. However, due to increasing construction costs and inflation, this package would costs $145 million (69 percent more than in 2002).

“I am confident we will put it on the ballot and I am confident it will pass,” said Council Member Tim Burgess. The city council will deliberate the proposal and hold sessions for public comment in May. However, Burgess added, “I think there is some sentiment in decreasing” the amount of the levy.

One obvious line item to slash is $9 million for first-time homebuyers. The fund would extend home loans to people making 80 percent of the county median income ($51,200 for a two-person household). I’m all for the housing levy, but, as a renter who cannot afford to buy a home, I can’t justify increasing my rent payments so that other people can buy houses.

The meat of the levy: Four-fifths of the the funds would go toward building 1,670 new apartments by constructing new buildings and restoring old buildings. Adrienne Quinne, director of the city’s Office of Housing, says 55 percent of those new units would be reserved for renters making under 30 percent of the area median income, about $17,000 a year. Most of the remaining stock would be reserved for people making between 30 percent and 60 percent of the area median income. Market-rate units would also be sprinkled into the buildings.

The real question, of course, is whether voters will pass this thing. A press packet included the results of a poll commissioned by the city and conducted by EMC Research. It boasts Seattleites support low-income housing funding “more than ever” by a three-to-one margin. However, that wasn’t a voter poll. The survey interviewed a cross section of Seattle adults, says Julie Moore at the Office of Housing. "We can't do polls of voters because that would be a campaign," she says. But the electorate, on average older and more conservative than the general population, could be less likely to support a levy.

The last housing levy squeaked by in 2002, when Seattle experienced a localized recession, garnering only 54 percent of the vote.

But voters should support this levy for families like the Gilberts. After Vernae Gilbert got out of the Army in 2005, she struggled to take care of her daughter, Natahlia, who has cerebral palsy and needs to be near Children's Hospital. Along with Greg Gilbert, they struggled to make ends meet and care for their daughter, while they lived for five months in a motel on public assistance. Then a housing-levy funded building opened in Wallingford. "If we didn't find this place, I don't know what we would do," says Vernae.

Although Dan wondered if the additional housing stock on the market will lower rental costs, making a housing levy unnecessary. But the lower rates are still unaffordable to people making $17,000 a year. For instance, apartments at the recently finished Leva in Ballard—where housing is in surplus—are going at a discount, but one-bedrooms are still $1,200 to $2,000 a month, far too much for thousands of local workers and families like the Gilberts who need a home in the city .

Comments 32
Tags: Blogs City
The Stranger depends on your continuing support to provide articles like this one. In return, we pledge our ongoing commitment to truthful, progressive journalism and serving our community. So if you’re able, please consider a small recurring contribution. Thank you—you are appreciated!
CONTRIBUTE NOW