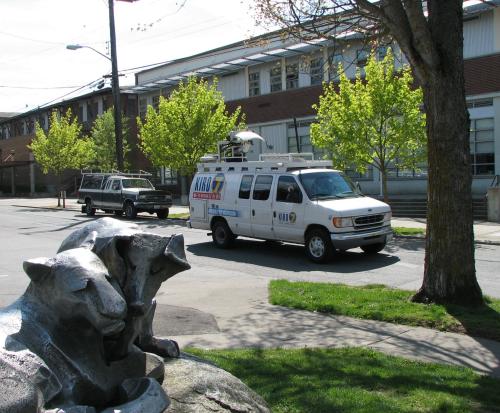 The doors to Madrona K-8 have signs on them explaining why the school is closed (you can read them here and here). That's the school in the background. Across the street from it, this pig is cavorting with a panther. They are part of a sculpture by Richard Beyer called "The Peaceable Kingdom" that sits in the grass outside the Madrona-Sally Goldmark Branch of the Seattle Public Library. An employee of the library, asked if she's worried about swine flu considering she works right across the street from the site of a probable case, said, "My boss just told me we're not able to comment on it."

Back outside, as that KIRO van was going past, someone rounding the block shouted to her friend, "KIRO still got their ass here? Shit, they've been here since 9 this morning! There ain't no news here!"

The PI is reporting that two siblings of the 11-year-old Madrona school student whose illness forced the closure of this school now likely have the flu as well. The possible number of cases in King County is now 13. Eight of them are children. According to the AP, 300 schools are now closed across the country.