"This is a great day for the people of the state of Washington," the governor begins.

During the debate surrounding the rights of gay couples, people all over the state saw that families headed by same-sex couples were "absolutely no different than other families," the governor continues, and the people of Washington state had to confront the, "unsettling notion that despite the sameness, the absolute sameness, of gay couples and straight couples... we saw discrimination, discrimination that had to be addressed."

"There are some in our state who do not share our commitment to equality," Gregoire continues, addressing I-71, the initiative that would repeal the laws that Gregoire will sign this morning. "There are still those who want to roll back those rights and domestic partnerships." Gregoire points out that we are in a time of economic crisis and we can't afford to be distracted by hatred and bigotry. "It is time for all of us here in Washington to stand up and say that we stand for justice," says Gregoire.

"We will not accept intolerance or inequality in Washington state."

You'd almost think Gregoire was here to sign a marriage-equality bill into law and not a third separate-but-equalish domestic partnership bill into law. If the state saw the absolute sameness of gay couples during this debate... then why has the state has opted to create an absolutely new institution rather than opening the existing institution of marriage to same-sex couples?

"I have to be honest," Jamie Pederson says during his remarks. "As much as this bill does, it still does not treat my family fairly."

"Tonight when the gay police officer and lesbian fire fighter goes to work," says Ed Murray, they do so knowing that "the families they leave behind will be protected." But so long as DOMA is the law of the land, Murray continues, "our families will still lack full equality. It is time to end those reprehensible laws."

Murray ends his remarks on a perfectly gay note: "We are almost over the rainbow," he says, and we see now that the "dreams we dare to dream really do come true." And with that... 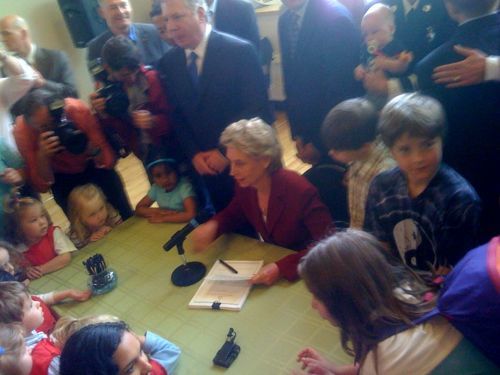 Gregoire signs the three separate bills that comprise the final package of domestic partner rights. Same-sex couples who register as domestic partners will now be treated no differently under than law, Gregoire says, than married heterosexual couples.

Comments 19
Tags: Blogs Homo Queer
The Stranger depends on your continuing support to provide articles like this one. In return, we pledge our ongoing commitment to truthful, progressive journalism and serving our community. So if you’re able, please consider a small recurring contribution. Thank you—you are appreciated!
CONTRIBUTE NOW