It turns out that Larry Stickney, the state’s emerging guardian of marriage, has had some marital problems of his own. From my article in this week’s paper: 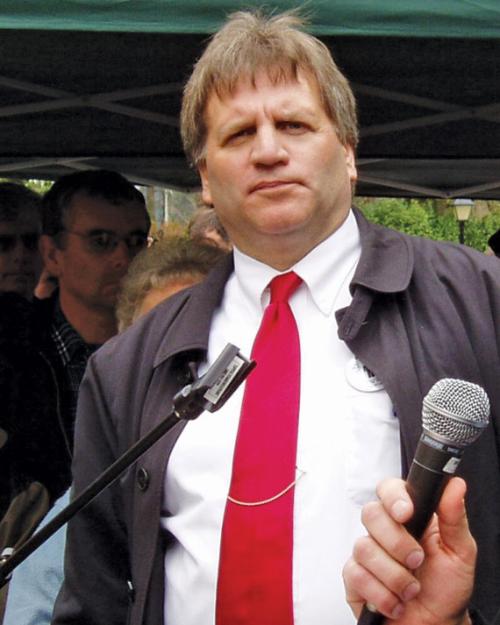 Anti-gay crusader Larry Stickney, whose organization, Protect Marriage Washington, filed a referendum on May 4 to repeal Washington State's domestic-partnership bill, wrote on his website that allowing gay marriage "will demolish the historical understanding and definition of marriage as that of uniting a man and a woman for life."

But Stickney himself—married three times and divorced twice—has not been united in marriage "for life." And, during his second marriage, his wife made serious allegations of domestic abuse.

Records from the Kitsap County Superior Court show that in 1994, Stickney's then-wife Cheryl alleged that he "badly injured" her twice, breaking her eardrum by hitting her in the ear. She also accused him of "[stealing] and destroy[ing] things belonging to my son and myself."

In addition, Cheryl declared to the court, “This last time I thought my jaw was broken but it wasn’t. It, however, is still not adjusted right.”

Stickney, who didn't return calls seeking comment, retorted to the court that Cheryl was lying and attempting to make him “look like a real scoundrel.” He wrote that Cheryl “is very feminist in her outlook,” adding that she “lacks respect and is very rebellious towards me and refuses to give me the authority and support that I, as the father of our two small children, need to run a functional household.”

But despite empirical knowledge that traditional marriage is not synonymous with stable unions, Stickney contends on his website that the referendum is necessary because “happiness and well-being of both the parents and the children are best served by the family unit.”

But a Kitsap County judge in the mid-'90s thought the Stickney family was better off without Stickney in the picture. Despite his pleas, the judge issued a restraining order against him, granting Cheryl temporary custody of the two children and requiring Stickney to stay away from the family home. Several months later, Cheryl filed for divorce.

"People are human and people makes mistakes," says state Senator Ed Murray (D-43), sponsor of the domestic partnership bill. Indeed, embittered divorces are commonplace—even without gay marriages—but the portrait of Stickney illustrates a man who is on no position to claim moral high ground against the sanctity of anyone else’s marriage. Taken together as a group, Protect Marriage Washington, including state Representative Matt Shea and Gary Randall, are hypocritical ship of crusaders.

“I wouldn’t necessarily pry into anyone else's life," says Murray, "but they have invited it.”

Comments 20
Tags: Blogs Homo Queer
The Stranger depends on your continuing support to provide articles like this one. In return, we pledge our ongoing commitment to truthful, progressive journalism and serving our community. So if you’re able, please consider a small recurring contribution. Thank you—you are appreciated!
CONTRIBUTE NOW