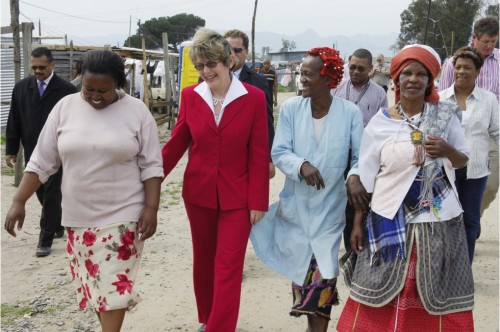 If the opportunity presented itself, I'd not think twice about removing Zuma from power (the new president of South Africa) and replacing him with the former mayor of Cape Town and current premier of the Western Cape, Helen Zille. If black South Africans had used reason instead of fellow feeling to select their leader, Zuma, who represents everything I hate about black African males (and therefore everything that is wrong with the whole of black Africa), would not be the president of the richest country in Africa. But black Africans will never be reasonable. Never. That's why I'll never live on that fucking continent.

Already, the trouble is starting. After avoiding the trap of black nationalism for all these years, South Africa is now turning its face to the past (traditions, patriarchal power) and its back to the future (invention, creation of new values). The BBC reports:

Hundreds of supporters of South African President Jacob Zuma have protested in Cape Town against criticisms of him by official opposition leader Helen Zille.

The Sowetan on Tuesday quoted Ms Zille as saying: "Zuma is a self-confessed womaniser with deeply sexist views, who put all his wives at risk by having unprotected sex with an HIV-positive woman."

Zille is right about this ignorant Zuma—the man who has the power, and will use that power, to destroy modern South Africa and make the apartheid period look like a paradise for black Africans. Zuma is nothing but a road to the hell Zimbabwe is in now.
Comments 9
Tags: Blogs Politics