Shutting Down the Gay ATM 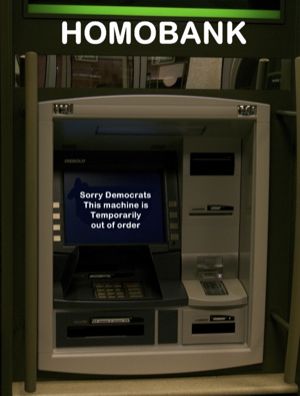 Two more of the gay bigwigs have pulled out of the DNC's LGBT Leadership Council fundraiser in DC. next week. The president of the Vermont Senate dropped out, saying...

Senate President Pro Tem Peter Shumlin has decided not to go to a large Democratic National Committee fundraiser next week to protest a U.S. Justice Department memo related to gay marriage.... "This memo from the Justice Department is more Bush than Bush," he added. "It takes the only minority group left in America that nationalpoliticians can publicly discriminate against and still see their numbers go up in the polls and it reinforces the horrible stereotypes about our friends and neighbors."

And Bruce Bastian, a major donor to the Democratic Party, is out:

Bruce Bastian, a gay businessman and prominent donor who lives in Utah and is on the list of special invitees, not only said he no longer plans to attend the fundraiser, but also that he no longer plans to donate to the Democratic Party as a whole.... "The administration has said they have to support the federal government's stance," he said. "But in the brief, they go way beyond where they need to go to just defend DOMA. They basically go to terminology and language that you would expect from the Bush administration, not the Obama administration."

Bastian said the brief was the "tipping point" for him in his perception for how the Democratic Party supports LGBT issues.

Comments 30
Tags: Blogs Politics Homo Queer
The Stranger depends on your continuing support to provide articles like this one. In return, we pledge our ongoing commitment to truthful, progressive journalism and serving our community. So if you’re able, please consider a small recurring contribution. Thank you—you are appreciated!
CONTRIBUTE NOW