When The Governor of South Carolina Goes Down Argentine Way...

...he really goes down Argentine way. Mark Sanford—a conservative Christian Republican and a defender of "family values"—admits to cheating on wife "with a dear, dear friend from Argentina." Sanford was the head of the Republican Governor's Association. He's resigning—as head of the RGA, not SC as Goob. He apologizes to wife, kids, supporters.

Sanford had been considered a prospect for the Republican nomination in 2012. Uh... that's over. Unless the GOP decides to go with a no-skeletons-left-in-our-closets ticket: Sanford/Ensign 2012!

Remember... these clowns are leaders of the party that wants to micromanage your private life. 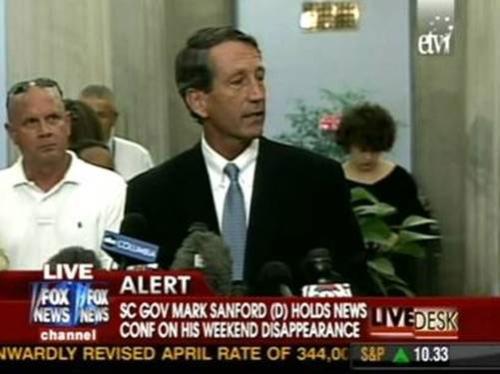 If Fox News didn't exist Jon Stewart would have to invent it. And I agree 110% with Urgutha in comments...

Mark Sanford and Rod Blagojevich should do a reality tv show together. Just the two of them doing unpredictable wacky shit.

Comments 59
Tags: Blogs Politics
The Stranger depends on your continuing support to provide articles like this one. In return, we pledge our ongoing commitment to truthful, progressive journalism and serving our community. So if you’re able, please consider a small recurring contribution. Thank you—you are appreciated!
CONTRIBUTE NOW