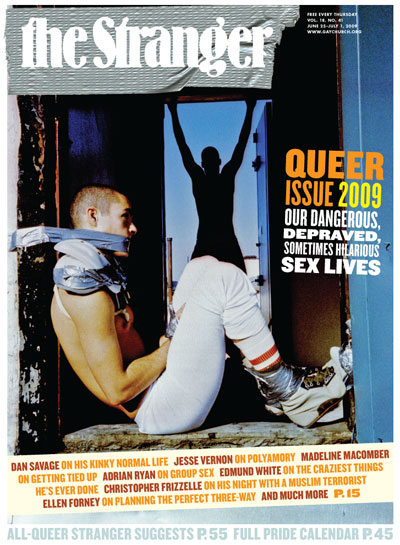 The theme this year is Shocked and Repelled: Our Dangerous, Depraved, Sometimes Hilarious Sex Lives. From the intro:

The enemies of equality are fascinated by the more extreme examples of gay sexual expression. They insist that homosexuality and monogamy are incompatible. They sneak into gay leather events like the Folsom Street Fair to take pictures, which they post to Christian websites. They appear on cable news to insist that all gay men consume feces. Gays and lesbians counter these accusations by insisting that we're not that different, that straight people are kinky too, that lots of gay people are monogamous. But you know what? They're right: Gay sex is totally fucking nuts.

Something about being gay facilitates the kinds of sexual adventures that our enemies can only dream about. Our struggle for equal rights under the law—for workplace protections, for an end to the ban on gays in the military, for marriage equality—is succeeding. Same-sex marriage is now legal in six states. Many Americans now see queers as no big deal, normal, almost boring. Which is why the religious right is working to shift the focus back to the dirtiest details of our sex lives. And honestly... our sex lives are insane. We know the real reason they're gathering in church basements to share photos taken at Folsom: They're jealous. We're having a blast, and it's killing them.

My Kinky Normal Life by Dan Savage
"Yes, gay people bake cookies, we go to work, we take care of our families, we pay taxes. But let's be honest: We're 'depraved' at slightly greater rates than straight people are..."

My Kinky Polyamorous Life by Jesse Vernon
"I have been at this long enough that the history of my love life has gotten super complicated—my friends' love lives, too. One night, sitting at a cluttered kitchen table in that moldy house with a carbon-monoxide leak and buzzing fluorescent lights, we decided to create a visual representation of the horrible mess of love and hate and broken hearts and lust that we had gotten ourselves into..."

My Nights Getting Tied Up (and/or Tying My Girlfriend Up) by Madeline Macomber
"Without a bed frame and with most of my stuff in storage, I had to get creative. Ropes and restraints opened up a lot of potential, and soon I couldn't look at objects without considering how much weight and tension they could hold. Door handles, window pulls, drawer knobs, chair legs, railings, and even bicycles..."

My Night Getting Peed On (To Say Nothing of My Nights Being Shaved, Being Beaten, and Being Fucked on Every Floor of a Park Avenue Office Building at Midnight by the Cuban Night Watchman) by Edmund White
"He has this completely nondescript face you'd never notice in a crowd—a balding blond in his 30s, a hard but un-worked-out body, and a foot-long kielbasa. Once I put my tux on for him. Soon we're stoned and I'm a disheveled mess of ruffled shirts and dangling bow ties and ripped-out studs and cuff links and big baggy boxer shorts around my gartered ankles and he's plowing all this crumpled finery..."

My Night with a Muslim Terrorist by Christopher Frizzelle
"Everyone has his thing. Mine is crazy people. His eyes should've been a clue—that vortexy feeling I got staring into them..."

My Kinky Relationship with Barack Obama by David Schmader
"That DOMA brief was the second punch to the face. Obama was officially becoming the Chris Brown to my Rihanna. I tried to understand, but there's only so much explaining away and narrative spinning you can do before you start looking like a deluded lovelorn masochist..."

My Adventures Playing Both Fields by Eli Sanders
"A straight friend recently asked me what I think about the amount of sex I had with women as a younger man, now that I'm gay. What my friend meant was: How do I square the fact that it wasn't just sex? He knew me. He knew I'd been in love with women..."

My Nights Being Watched—Or, the Sadomasochistic Life of a Musician by Gina Young
"Musicians make ourselves vulnerable, repeatedly, publicly. Musicians set up a scene with no idea where it's going to go. It's edge play with no safe word. And it's pretty hot..." 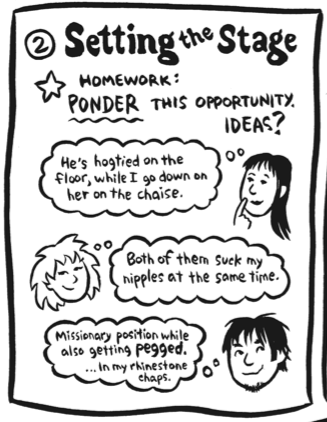 OH, AND: an all-queer Stranger Suggests and the full pride calendar.

The awesome photo on this week's cover is by the kinky genius Slava Mogutin, who's got quite the collection going: Remember this one? Or this one? You can find more of his stuff here.