"It felt so very Stonewall, but without the standing up for ourselves.” 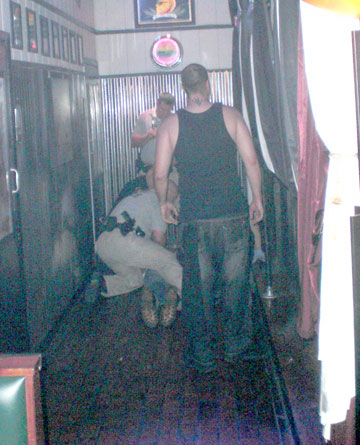 Police in Forth Worth, Texas, marked the 40th Anniversary of the Stonewall Riots—which were sparked when the NYPD raided a gay bar called the Stonewall Inn—by raiding a gay bar called the Rainbow Lounge. Fort Worth's finest are accused of using excessive force and making arbitrary arrests for public intoxication (a phenomenon that's never been observed in straight bars in Texas). The Instant Tea blog at the Dallas Voice is all over it but it's a confusing read. There's a good summary at Towleroad. There's a Facebook page with info, links, and eyewitness accounts.

Protests are underway in Fort Worth—so the standing up has begun. And let's look on the bright side: forty years ago the NYPD could've raided a bar called the Rainbow Lounge and we'd be marching today to mark the 40th anniversary of the Rainbow Riots.

Comments 41
Tags: Blogs Homo Queer
The Stranger depends on your continuing support to provide articles like this one. In return, we pledge our ongoing commitment to truthful, progressive journalism and serving our community. So if you’re able, please consider a small recurring contribution. Thank you—you are appreciated!
CONTRIBUTE NOW