The Oddballs for King County Executive

Tonight at the Seattle First Baptist Church, about 100 mostly silver-haired voters got an earful. Naturally, they heard from the serious candidates for King County Executive who have dutifully shown up to every forum (and are invited to every forum). But this forum was different. The League of Women Voters of Seattle invited all eight candidates, and all eight had their say. 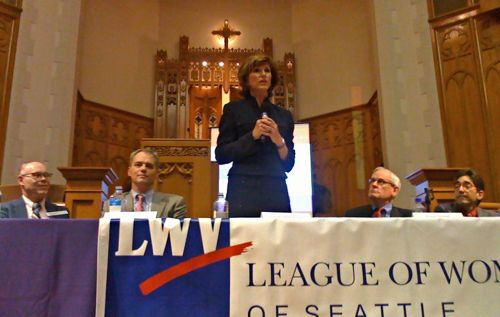 Goodspaceguy Nelson was the debutante of the ball. “Can you hear me? Thank you. Sometimes we don’t get invited, so this is one of the few times we are all here together,” Nelson said. “Boeing makes not only airplanes but spacecraft," he said, launching from his campaign platform. "I want them not just to make more airplanes but more spacecraft.” He used a lot of metaphors about "highest potential" and "moving upward." When asked about more earthly subjects, like what we should do about fixing the structurally compromised Howard Hanson Dam, he said, "We should have more dams to create several man-made lakes to make King County more of a tourist destination.”

I became enchanted with Stan Lippmann, a physicist who has run for nearly every local office and lost every time. Lippmann, speaking in a lullaby cadence, shares with the listener an alternative reality where transportation can be fixed by magical transit systems that cost half the price and cut traffic in half, a reality where we live robust and healthy without man-made medicines, and a world “inspired by the Jetsons.” As Dow Constantine talked about the need for rapid response to swine flu outbreaks, Lippmann began shaking his head violently. “It’s all about moving more Tamiflu off the shelf," he said. "It is all a hoax. I will protect you from it."

Reclusive Republican Susan Hutchison told the voters sitting in pews that she ran because, “I saw the need for a nonpartisan, non-politician to step in.” Yes, indeed, finally a nonpartisan. Hutchison’s most puzzling statement was in her one-minute answer to a question about how the county can maintain human services without raising taxes. “Nonprofits get the most bang for the buck,” she said, noting that the county could fund those groups instead of providing services itself. “If we can consolidate those services, we can cut the overhead.” Like find one big nonprofit—a nonpartisan, nonpolitical (and nonexistent) nonprofit—to handle all the county health problems. Of course.

Comments 19
Tags: Blogs Politics
The Stranger depends on your continuing support to provide articles like this one. In return, we pledge our ongoing commitment to truthful, progressive journalism and serving our community. So if you’re able, please consider a small recurring contribution. Thank you—you are appreciated!
CONTRIBUTE NOW