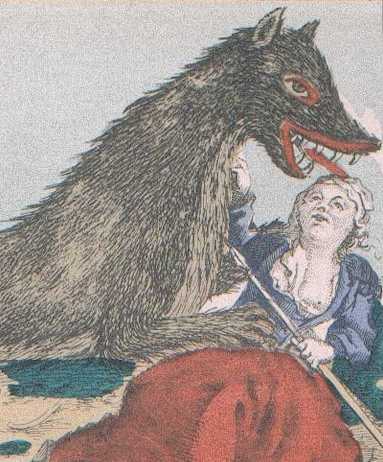 The Wikipedia page for "Wolf attacks on humans" is awesome. This could devour my entire day.

1851, Lorges Forest, France. A rabid wolf ran amok for 45 kilometres (28 miles) in seven hours, through nine villages, biting 41 people of whom 14 subsequently died of rabies. The wolf also bit nearly 100 animals and many presumably died from rabies too.

1910, Waterloo, Iowa. Wolves attacked him whilst he was alone in a wood, waiting for the return of his brother. When the latter returned he found his brother's bones. In the center of a circle of five dead wolves was an empty repeating rifle, showing that he had been overpowered before he could reload his weapon.

1948, Unspecified Soviet province. Svetlana was attacked by five wolves when she and her friends were walking home from school. The wolves dragged her a kilometre into the forest. All that was found was an overcoat.

Comments 15
Tags: Blogs Death Animals
The Stranger depends on your continuing support to provide articles like this one. In return, we pledge our ongoing commitment to truthful, progressive journalism and serving our community. So if you’re able, please consider a small recurring contribution. Thank you—you are appreciated!
CONTRIBUTE NOW