The Heart of Alaska: More on the Teacher Killed by Wolves

The woman holding the dead fox? 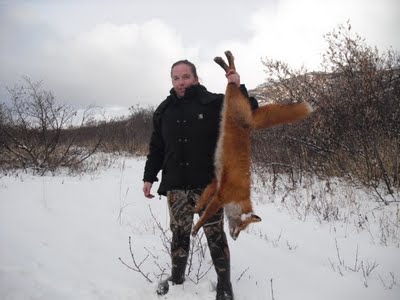 Her body was dragged off a rural road, leaving a bloody track, into the nearby bush and was surrounded by wolf tracks.

Her name is Candice Berner, the town she moved to, Perryville, only has four main streets and is surrounded by the coldest trees, freezing mountains, frozen waterfalls, and wild animals.


Julia O'Malley of the Anchorage Daily News posted a marvelous (certainly cinematic) reading of Berner's blog, Adventures of an Alaskan Bush Teacher, which is dedicated to her Alaska period, the last period of her short life—she died at 32:

The blog begins in Anchorage, packing with a group of rural teachers. She flies west from the city, catching smaller and smaller planes. Below her, rivers thread through the land. Then her window fills with ocean spotted with islands. Finally, Perryville.

Soon the colors on the hillsides in her photos deepen. Rain comes. She learns about trapping and tanning hides. She befriends a couple of village dogs that meet her at her house before morning runs and follow her. Dogs drive bears away, she writes.

"In return (the dogs) get milk bones, which are a luxury in the village," she says.

Always, it seems, she's thinking about of how the wild land outside the village can be dangerous.

...She posts a photo of someone pulling a skiff out of Chignik Lake in the rain and wind. The next picture stops me. A stuffed wolf in a glass case.

"Chignik Lake's mascot is a wolf and it sits in the lobby of the school," she writes. "It's a great reminder of what lurks outside in the wilderness and to be on the alert at all times."

From the dark course of O'Malley's prose we receive a good dose of Northwest noir in almost its purest form—excellent timing, exquisite details, striking images ("...near Thanksgiving, she stands in the snow, holding a red fox by its feet"). As for Candice Berner's blog, it is here. As for Aubrey Morrison, my post owes everything to her tip.