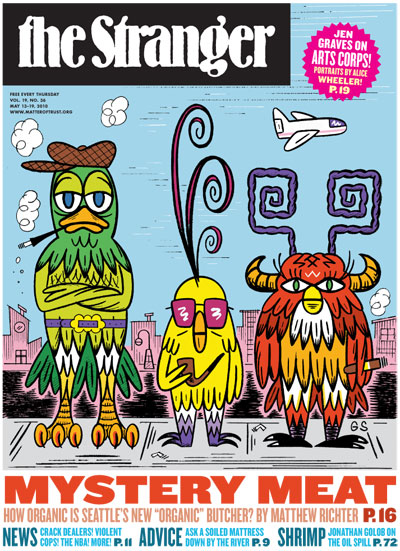 Mystery Meat: Matthew Richter Investigates One of Seattle's New "Organic" Butchers
"When asked, butchers at two Bill the Butcher locations said, 'Everything in the case is organic.'" It's not...

Jen Graves on Whether Art and Music Can Change the Lives of Kids
"Arts Corps accepts the necessarily imperfect system of striving and failing and trying it another way, of never losing hope that art can alleviate the fucked-up realities of racism and poverty but never using art as a distraction to cover or prettify those realities..."

Dominic Holden on the Seattle Times's Misguided Coverage of a Recent Drug Bust in Pioneer Square
"Police records show the defendants were not drug-ring leaders, as the Seattle Times suggested by calling them some of the 'most prolific sellers of crack cocaine'..."

Local Fox Affiliate Accused of Suppressing Violent Cop Footage
"A freelance videographer who filmed a Seattle police officer apparently stomping an innocent Latino man's head against the concrete and threatening to 'beat the fucking Mexican piss out of you' says that Q13, the local Fox affiliate, refused to air the footage because station executives didn't want to jeopardize their access to police sources..."

Paul Constant on What Sci-Fi Author Cory Doctorow Tells Us About the World We're Living In
"The book imagines what that post-corporate-behemoth world would look like, a world where the Disney corporation—the last flailing mammoth on the plain—will do anything, even kill, to keep from going extinct..."

Former City Council Member Judy Nicastro's Plan to Woo the NBA Back to Seattle
"Nicastro intends to ask the King County Council to forward the measure to voters on the fall ballot, bypassing the standard process of circulating petitions..."

Dave Segal on Psychedelic Audiovisual Mindfuckery
"Seattle, with its drab skies and chilly dispositions, could really use something like Andy Warhol's Exploding Plastic Inevitable or Ken Kesey and the Merry Pranksters' Acid Tests. Along with the heady aesthetes of Portable Shrines, one local clique striving toward something like these disorienting multimedia spectacles is the graphic-arts/web-design/marketing company Dumb Eyes, via its recurring audiovisual night Penetration..."

Plus! Public Editor by A. Birch Steen ("Who are you, sir, and what have you done with the real Charles Mudede?"), Last Days, Returning Column: Ask a Soiled Mattress Down by the River, I Anonymous, Chow Bio (Russ Flint isn't too chicken to tell you where he gets his meat), The Happiest Hour, Fucking in the Streets (LCD Soundsystem's new album), It's a Hit, Data Breaker ("The time has come to remove the mothballs from your elephant-bell pants, re-up on your Pixie Sparkle body glitter, and get sorted for Es and wizz"), My Philosophy, The Score, Drunk of the Week ("Mommy needs more Mommy-water!"), Poster of the Week, Underage (Black Breath's Heavy Breathing), Party Crasher ("...being so high on mushrooms that you believe you're having gay sex with Bob Marley..."), I Love Television, Savage Love ("Whatever lifts your baggage... "), and much, much, MORE!