Despite a resolution unanimously passed today by the city council that calls on the city to boycott Arizona businesses, most Seattle residents disagree, according to a poll released today by SurveyUSA. Pollsters asked 442 people in the city of Seattle who are familiar with Arizona's new heavy-handed anti-immigration law this question: "Should the city of Seattle continue to do business with companies located in Arizona? Or should Seattle boycott Arizona companies to protest the new law?" Here's what they said: 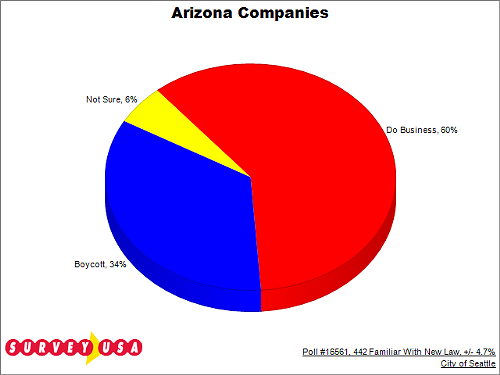 Which isn't to say that most Seattle residents like the new Arizona law—most respondents oppose it (55 percent to 41 percent) and a plurality think the city should "officially" oppose it (45 to 31 percent)—but they don't think a boycott is in order.

Comments 27
Tags: Blogs Politics
The Stranger depends on your continuing support to provide articles like this one. In return, we pledge our ongoing commitment to truthful, progressive journalism and serving our community. So if you’re able, please consider a small recurring contribution. Thank you—you are appreciated!
CONTRIBUTE NOW