Who Is Pastor Jeff Owens?

That question is answered on this website. Jeff Owens "is a man of great expression, compassion, and wisdom," who currently leads the Shenandoah Bible Baptist Church, "one of America's most exciting churches," a church located in a part of West Virginia that serves as a suburb of Washington D.C. Pastor Owens is "a soulwinner, fervent preacher, and takes an uncompromising stand against sin; but the hallmark quality of Dr. Owens is his genuine love and concern for people." In this sermon Pastor Owens lovingly and compassionately calls on his flock to terrorize and murder gays and lesbians:

We need to stop burning flags and start burning fags. We need hunt-a-homo week. We need to take 'em all out and shoot 'em with a scatter shotgun: that's Christian compassion for you all right. Now for all you moderate Christians offended by this sort of thing—by Owens' sermon, by my posting about it—if you want to tell anyone that Owens doesn't speak for all Christians, go tell Owens. I'm sick of hearing it, frankly, and Owens needs to hear it. And you can reach Pastor Compassion at...

Listen to that sermon again—listen to Pastor Owens crank up his congregation, listen to Jesus's followers scream and cheer when their loving, compassionate pastor encourages them to get out there and murder gays and lesbians. That's the kind of rally—so Nuremburgish—that gets innocent people killed. Listen to that sermon again. And then give the vile piece of shit a call: 304-263-3461.

UPDATE: I wonder if Pastor Owens recorded the above sermon before or after he recorded this one:

UPDATE 2: The YouTube video of Pastor Owens urging his flock to get out there and commit hate crimes—murder is a hate crime, right?—has been yanked. Hopefully someone dubbed it. The quotes above are verbatim, and not "taken out of context." I don't know how you could put "we need to stop burning flags and start burning fags" in a context that makes it less of an incitement to commit a hate crime. Also: in the deleted clip Pastor Owens used some of the same language and arguments he made in his sodomy sermon: we need to shove this sin back in the closet, gay people wouldn't be coming out at all if more Christians stood up to them.

Because, hey, when was the last time Christians stood up to the gays anyway. We've been getting a free pass from the Christians for, oh, the last two thousand or so years, right?

UPDATE 3: Someone reading JMG was wise enough to make a copy before it got yanked. You can download your own copy of the tape Pastor Owens doesn't want you to hear here. Will post the video to Slog once I figure out how to do that.

UPDATE 4: The video is back up courtesy of JoeMyGod... 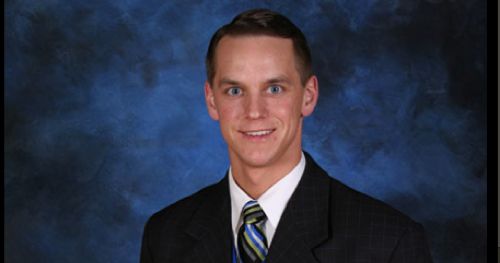 This wild-eyed fundy is the youth pastor at Shenandoah Bible Baptist Church. His name is Brother Joshua Owens and presumably he's the offspring of Dr. Jeff Owens, the gay-bashing, violence-inciting bigot who "leads" Shenandoah Baptist. I have a feeling we'll be hearing more from Brother Joshua in the future. Something about those eyes.

UPDATE 7: Via Slog commenter IGUB: While Dr. Jeff Owens was preaching (hate), at least one of his kids was preying (on kids)...

A 22-year-old Martinsburg man charged last year with having sex with two teenage girls in Berkeley County has agreed to a plea offer from the county prosecutor’s office. Jeremiah Daniel Owens pleaded guilty to two counts of sexual assault charges from an eight-count indictment handed up in October 2007 that charged him with sexual assault and sexual abuse against two girls, ages 15 and 13, and that stemmed from separate incidents earlier that year.... According to a previous report, the mother of the 13-year-old, whose name will not be published to protect her identity, said her daughter met Owens at the Shenandoah Bible Baptist Church in Martinsburg where Owens’ father is the pastor.

UPDATE 8: Slog readers who wrote to Dr. Jeff Owens via Shenandoah Bible Baptist Church's website to register their disgust with his sermon calling for the murder of out gay men and lesbians have been getting this email back from Owens:

Nearly 15 years ago I preached a sermon that promoted physically hurting gay people. I was young, stupid and immature. I didn’t even hold to the belief of hurting people when I wrongly made those comments. I regret those words and have asked God to forgive me for them. I am not a believer in the gay life-style but I was profoundly wrong in making any comments about hurting people. If I could retract those words I certainly would.

I wrongly represented both God and myself. I truly believe that God is a God of LOVE. I believe he loves the whole world even when people in the world do things that are wrong; Such as my wrong representation of how to treat someone who does not believe the same way I do.

With a sincere heart,

Owens looks to be in his fifties, judging from the photo here. And according to his bio Owen has been "preaching the Gospel since 1976." So he had been a preacher for nearly two decades when he delivered his soon-to-be-infamous sermon way, way back in 1995. So, again, stupid and immature—and hateful and vile and disgusting—we can give him. But the man wasn't young.

I sent Dr. Owens an email asking for an interview. I'd like him to walk me—and all of you—through how he got from kill-the-gays to tolerate-the-gays-but-condemn-their-lifestyle. What changed him? Who touched his heart? What was his yellow-brick-road-to-Damascus moment like? My email to Dr. Owens is after the jump. I'll let you know if I hear back from him.

And here's my email to him:

my name is dan savage and i'm a writer, author, editor and... blogger. along with Joe Jervis, I posted that YouTube clip of your sermon today, the one where you seemed to be calling on your congregants to literally murder out gay men and lesbians. i understand that you've received numerous emails and calls as a result of your old sermon appearing on our websites today, and that you've responded directly to people who've reached out to you, disavowing that old sermon.

I was curious if you still believed the things you espoused in that sermon. earlier today i posted a link to what turned out to be a later sermon, one in which you explicity stated that harming gay people — or our property — was a sin. i pointed out the discrepancy between those two sermons. my post is here:

i would like to interview you for my blog, perhaps for my column, about that old sermon. i realize that you'll most likely regard my post and the updates, if you read them all the way through, as snarky and highly disrespectful. sorry about that. but so long as you're out there condemning my "lifestyle" — and you do continue to condemn my "lifestyle," whatever that means, even if you are no longer calling on your followers to actually murder me — i feel justified in subjecting you to a little sarcasm.

anyway, dr. owens, if you would like to talk about that old sermon, what you were thinking when you delivered it, what you're thinking now, and if you would like to walk my readers through how your thinking evolved — how you got from openly advocating murder to instructing your followers to be tolerant — i would happily make some space available. you can take this as an opportunity to apologize to folks who were offended by your old sermon but also, around the edges, to do a little evangelizing in a place — my blog — where that sort of thing rarely ever happens.

Comments 93
Tags: Blogs Religion
The Stranger depends on your continuing support to provide articles like this one. In return, we pledge our ongoing commitment to truthful, progressive journalism and serving our community. So if you’re able, please consider a small recurring contribution. Thank you—you are appreciated!
CONTRIBUTE NOW