Lest Memorial Day Pass By Unmentioned

... a brief bit of wonder at the modern American military:

The Critical Care Air Transport Team's mission is to operate an intensive care unit in an aircraft cabin during flight adding critical care capability to the U.S. Air Force Aeromedical Evacuation System. CCATT patients have received initial stabilization, but are still critically ill they require evacuation from a less capable, to a more capable hospital.

The 59th Medical Wing is tasked to provide 15 CCAT Teams.

The CCATT is designed to support combat casualties being evacuated from the combat zone. 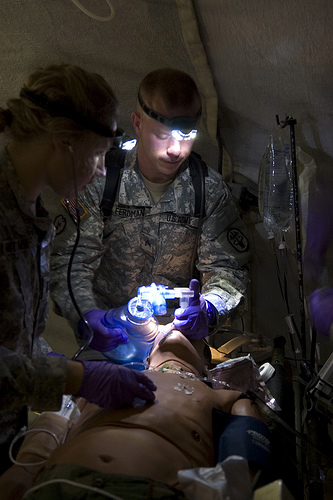 The US military—particularly before Halliburton et al got ahold of things—always distinguished itself with amazing, top-line, logistical operations. This mobile, portable, flyable ICU is (in part) why so many fewer have suffered the ultimate price for our most recent wars.

Comments 13
Tags: Blogs War Health
The Stranger depends on your continuing support to provide articles like this one. In return, we pledge our ongoing commitment to truthful, progressive journalism and serving our community. So if you’re able, please consider a small recurring contribution. Thank you—you are appreciated!
CONTRIBUTE NOW