I Wouldn't Call That A "Missed Connection" 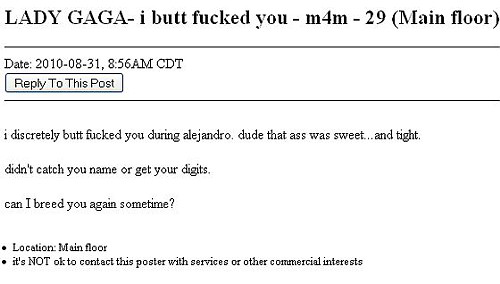 I'm going to pretend—to stave off despair—that some poor custodian swept a discretely used condom up off the floor after Lady Gaga's concert in Minneapolis.

And a general note to my fellow faggots: You've heard the news, right?

The weak economy is crippling the government program that provides life-sustaining antiretroviral drugs to people with H.I.V. or AIDS who cannot afford them. Nearly 1,800 have been relegated to rapidly expanding waiting lists that less than three years ago had dwindled to zero. As with other safety-net programs, ballooning demand caused by persistent unemployment and loss of health insurance is being met with reductions in government resources.

The feds found a little bit of money to help close the gap—but just barely and only for now. But let's not fool ourselves: the government is broke and a lot of things we thought we could count on—five day school weeks, paved roads, federally subsidized AIDS meds—are on the chopping block. So we should probably stop factoring free-AIDS-meds-for-life in to our personal risk algorithms when we're making decisions about who we allow to "breed" our asses and how we allow 'em to be "bred."

Comments 27
Tags: Blogs Sex
The Stranger depends on your continuing support to provide articles like this one. In return, we pledge our ongoing commitment to truthful, progressive journalism and serving our community. So if you’re able, please consider a small recurring contribution. Thank you—you are appreciated!
CONTRIBUTE NOW