There's one month left until California votes on Prop 19, which would (1) legalize marijuana and (2) let local jurisdictions fight with the feds over the right to tax and regulate it. Here's the latest poll from SurveyUSA: 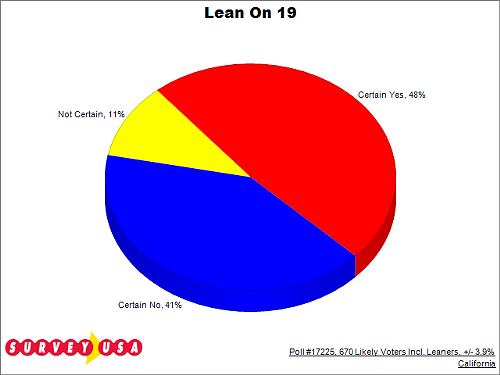 That's 48 percent yes, 41 percent no, and 11 percent undecided—which is pretty good. The crosstabs are over here. Groups with over 50 percent support for Prop 19 are men, people under 50, white, moderate to liberal, dislike the Tea Party, make over $80,000, and live in the Bay Area. In other words, rich smart hippies.

Whenever Prop 19 comes up, folks seem to debate whether the feds will allow pot to be legalized and yada yada. For what it's worth, federal preemption matters only so far that there is federal enforcement of pot. So possession and small-time cultivation of pot can be legal in a state without practically stepping afoul of federal enforcement (even though it's not federally legal). The feds just don't handle those small cases; local law enforcement, municipal courts, and state courts do that. But federal law does matter when you're talking about big operations, giant fields of pot, and stores selling out in the open. Federal courts handle those. As for Prop 19, it would allow both: Local jurisdictions could try to tax and regulate pot, and, if they try it, that's certain to end up before the Supreme Court. But the rest of the law—the part about growing small amounts and smoking pot at home—would stay intact. Recently in comments, Joe Szilagyi asked, "Has there ever been a situation where the Fed said x was illegal but a State declared x legal?" Medical marijuana is legal in a dozen states despite federal law that prohibits it. Those laws still stand, but they offer only limited protection. The caveat, again, is that if folks stray into federal jurisdiction—like over 100 plants or major sales—and the feds decide to prosecute, the state law doesn't apply.

So if Prop 19 does pass, expect a spectacular showdown with the feds—while folks grow small home gardens of pot with impunity, get stoned with confidence, and watch the show from the sidelines.

Comments 6
Tags: Blogs Politics Drugs
The Stranger depends on your continuing support to provide articles like this one. In return, we pledge our ongoing commitment to truthful, progressive journalism and serving our community. So if you’re able, please consider a small recurring contribution. Thank you—you are appreciated!
CONTRIBUTE NOW