This week's feature on Washington State Supreme Court Justice Richard B. Sanders quoted briefly from some columns he wrote as a young man for the University of Washington Daily. Yesterday, in the interest of sharing source documents, we brought you his full column on Dr. Martin Luther King Jr.'s "suicide." Below is another representative Richard B. Sanders column from the time period, this one originally published in the Daily on January 17, 1968. It was transcribed (original bolds included) by Stranger intern Ernie Piper. 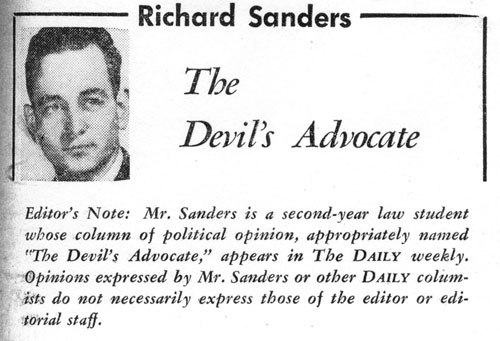 While the legislative programs of the “New Frontier” and the “Great Society” have certainly not left the American landscape unchanged, the fundamental revolution in the American way of life has neither been led by Congress nor even the executive—it has been led by the Supreme Court. Segregation, one man-one vote, prayers in public schools and rights for accused criminals seem to be primary targets for the Court. The decisions have been met with controversy, and, sometimes, hostility from the public and politicians alike. The charge has been frequently leveled that the provision of the Constitution in question (the 14th Amendment) “doesn’t really mean” what the Supreme Court says it does.

Maybe the court was wrong in its interpretations; but, even so, the argument misses the mark. The truth of the matter is that the 14th Amendment to the Constitution was never legally adopted in the first place. (See vol. 28 Tulane Law Review p. 22 and vol. 13 Baylor Law Review p.1)

However, even at that, the framers of the original Constitution were not satisfied until the added to the same article the additional safeguard that “no state, without its consent, shall be deprived of its equal suffrage in the Senate.” The story of the so-called adoption of the 14th Amendment is also the story of the violation of Article V of the Constitution in both letter and spirit.

Throughout the civil war it was the announced view of both President Lincoln and Congress that the Southern States always were, are, and will “continue to be, honored and equal of this Federal Union.” Following the assassination of Lincoln, President Johnson followed the Lincoln policy of amnesty and recognition of the reconstituted Southern state governments. By December 1865, all of the former Confederate States had elected governments according to the presidential plan. All but one of these governments had also voluntarily ratified the 13th Amendment abolishing slavery.

But this was not enough to satisfy “the Radical Republican” faction of Congress. They had much more sweeping changes in mind in the form of an additional 14th Amendment. Knowing that this was too much for the south (and a good part of the North) to swallow, Congress refused to seat all of the Southern Congressmen and Senators—thus violating the Constitutional provision that “each state shall have at least one representative” (Art. 1, Sec. 2) nor shall it “be deprived of equal suffrage n the Senate.” (Article V). Only after the exclusion o the Southerners were the radicals barely able to muster the two-third vote necessary to propose the 14th Amendment to the states for ratification.

Even if the Amendment was legally proposed it still required ratification by three fourths (28) of the states. By January of 1867 10 states had formally rejected the Amendment. Since there were 36 states in the Union at that time, even if every other state had ratified, the Constitutional requirement could not have been met.

The only way ratification could have been obtained at this point was by a reversal of the position taken by the rejecting states. The reconstruction act of March 1867 was designed to accomplish this purpose. The act recited that the then existing Southern governments were illegal (the same ones which ratified the 13th Amendment) and pit them under military rule. The act was vetoed by President Johnson as a “Bill of attainder against nine million people,” but his veto was overridden by the illegally constituted Congress.

Under the terms of the Reconstruction act a large segment of the Southern population was disenfranchised and fundamental liberties such as the writ of habeas corpus were suspended by the military. By July 21, 1868, enough ratifications were obtained from seven of the Southern states through their unrepresented governments to “qualify” the Amendment for adoption.

Since the alleged adoption of the 14th Amendment, the Supreme Court has consistently refused to review its adoption on the merits. Perhaps the question is “too hot” for the courts to handle. But could it be any “hotter” than forcing a significant segment of the American population to live under a law illegally conceived under the most undemocratic conditions imaginable?

It is of little wonder that when most of the Constitution receives near consensus support the products of the alleged 14th Amendment continue not receive intense opposition from diverse elements of the community.

Indeed, one of the reasons that the U.S.A. is one of the youngest counties and yet has nearly the oldest continuously functioning government is that we have given our consent to be governed rather than having government forced upon us. Regrettably the 14th Amendment seems to be an exception to this American tradition. Can the Amendment be repealed, resubmitted, or repudiated by the courts after 100 years? It is better late than never!