Tense and Tired, A Tent Fight and (At Least) One Arrest at Westlake 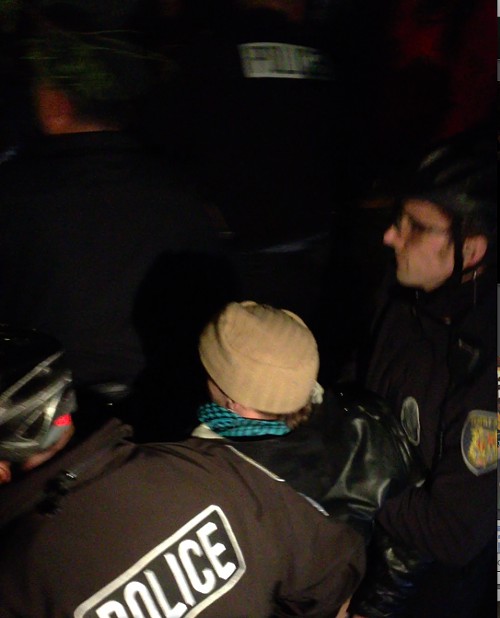 A police officer leaning on the wall outside the makeup store Sephora yelled back at this noisy would-be ghost of Williams, the Native American wood carver who was shot dead last year on the street by a police officer, taunting, "Whooo?"

It seemed an incredibly ominous exchange to witness upon entering this night's protests.

It was around 9 p.m., and a hundred or so Occupy Seattle protesters were continuing their stand. About two dozen organizers were huddled around for a General Assembly meeting about next moves; the park closes at 10, and everybody agreed the police felt unfriendlier tonight after a sweep of arrests this morning. 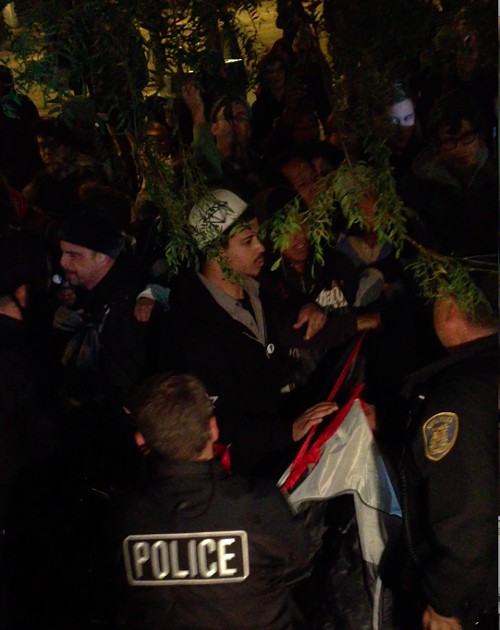 "Feed the flames!" one protester called out. Another vehemently insisted that anyone moving south to the mayor-sanctioned camp with power and internet and bathrooms was a sellout. Other ideas for locations surfaced: the park near SCCC? Denny Park?

I asked a pair of officers what might happen after 10, but they only answered practically.

"We were told to come down here," she said.

I overheard another: "I'm not getting overtime for this."

Ten p.m. came and went, and then 11. Around 11:15, just before the close of the TV-news night at 11:30, a core group of protesters erected a tent—forbidden!—and a clump of officers moved in. 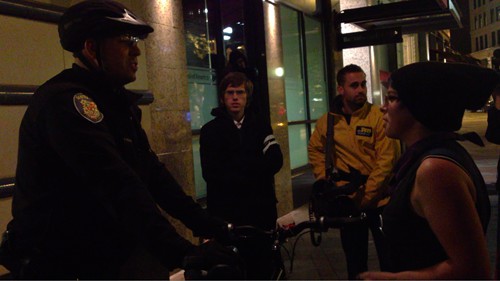 Things immediately dehumanized. The officers gated off the small area with bikes. They collapsed the tent, and the man who had previously been insisting that going to City Hall meant selling out was suddenly seated on the sidewalk being arrested. "He wants to be arrested," the arresting officer called out, sing-songy, mockingly. On the flip side, I'm pretty sure I saw calculation on some protesters' faces as they tried to figure out just what they could do to get arrested without experiencing too much pain (who could blame them?), and cops trying like hell not to take any bait. The edge was close. Flashing phones and video cameras and lights and computer screens were being pushed at the faces on both sides of the front line of the now-collapsed tent. "The whole world is watching" was chanted, but it was unclear what the whole world was seeing.

Somehow the situation just drained away; people dispersed. Only one young woman in glasses kept yelling and poking her finger at and following around a police officer while demanding he answer the question, "Why are you being such a fucking asshole and not doing your job?"

By midnight, the protesters were looking for another tent in order to restage the situation. One had been down to the camp at City Hall, but all the tents there were spoken for, "which makes me sad," he said.

Were the sleepers sellouts? I couldn't help but think of the women who camped out at Greenham Common in England for 19 straight years. There's something to be said for simply keeping a thing going in whatever way you can. 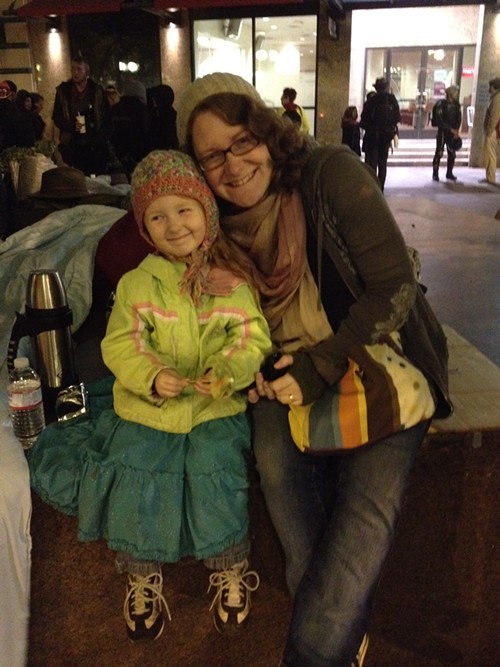 Most protesters had opinions but didn't seem to feel much like arguing. They were each sure of why they were there, even if their reasons were all different.

"It's not about one issue; it's about people over money, that's the bottom line," said M.T. Andrews, a Native American woman and Real Change writer and vendor with family police brutality stories to tell.

"People say we don't have a point—that's because there's a lot of points! Dude, we all have a point," said Forrest Baum.

Even Nick Castillo, the man who at first told me, "Don't hate, don't participate," and who stood on the outskirts, explained, "I come because everything here make sense. They say vote on it, we vote on it, and it seem not to make a difference. It's a mess. I don't have a job. I wish I did. I want to sweep these streets right here."

Three-year-old Ophelia Orcutt-Whipple: "We need to protest the Disney corporations that have the greedy bigs."

Ophelia's father, Michael Whipple, was the protesters' chosen police liaison this morning, when the police swept the park and made several arrests. "Cocky" was how he described them, high-fiving as they broke down tents, "contemptuous." Now they were giving him the runaround, he said. There was a bad new tone tonight. "Their tolerance of us has decreased," another organizer said flatly. Everybody was punchy.

David Trujillo, who once worked as a news intern at The Stranger, talked of Tiananmen Square, where some soldiers changed sides to support the students; the same thing has happened in the Middle East. We need to make connections with the police officers, he said. It reminded me of something Forrest Baum said: "We don't have to hold the park, we have to hold the higher ground."

As I left, I overheard an officer telling an organizer, "I'd rather be home with my family." She nodded and agreed.

Maybe he could bring his family next time.

Comments 15
Tags: Blogs Occupy
The Stranger depends on your continuing support to provide articles like this one. In return, we pledge our ongoing commitment to truthful, progressive journalism and serving our community. So if you’re able, please consider a small recurring contribution. Thank you—you are appreciated!
CONTRIBUTE NOW