Carmageddon, by Bike (Or: Downtown to West Seattle in 20 Minutes, no Viaduct Necessary)

Time yesterday evening from downtown to West Seattle: 20 minutes
Normal time from downtown to West Seattle: 20 minutes
I met Robin Randels, classes coordinator for the Cascade Bicycle Club, at about 5 p.m. on Capitol Hill yesterday evening, just in time to do the rush hour commute to West Seattle together—by bike.
Based on the headlines I figured a battle for road space with irate carmageddon drivers was ahead, so I strapped two furiously blinking lights to my bike, put on a bright yellow jacket, tightened my helmet, and off we went.
South on 12th Avenue in the bike lane, west on Jackson into Pioneer Square, and... nothing. I mean, there was a bit of evening commute traffic, but nothing at all unusual. Onward we pedaled, under the not-yet-being-torn-down part of the Viaduct, onto a smooth and brand new bikeway through the port freight hell that lies south of downtown, and then suddenly we were at Viadoom ground zero. 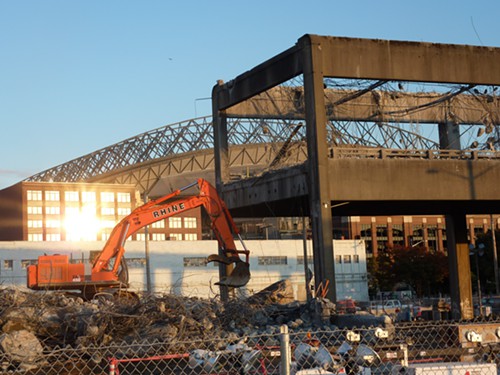 Bike commuters pulled over to the side of the bikway, gawking like little kids at the giant orange machines that were jackhammering and sawing apart the big double-decker roadway, or else jawing about in its remains.
There were tons of them, the commuters, a steady stream out of downtown in the kind of gear that only serious, regular commuters wear—the highly reflective gear that looks basically like what the Viaduct destruction guys had on. If there was fury and gridlock on the roads around us, we were blissfully unaware down there on the sea-level bike path, which was too low to allow direct sightlines to the lanes of I-5 or the decks of the West Seattle Bridge.
We rode on. Around the place where the new bike path ended, we came to these weird scenes of concrete carnage: 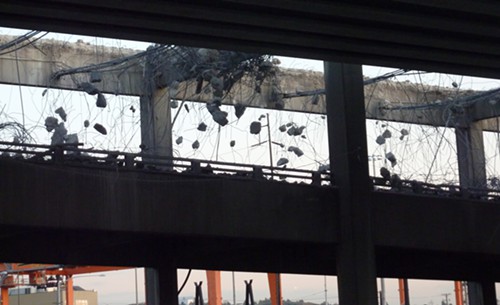 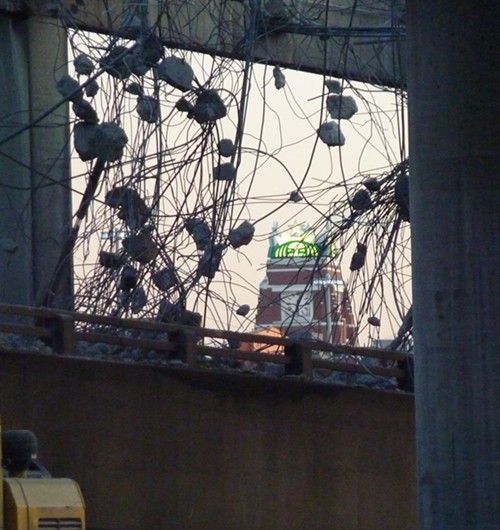 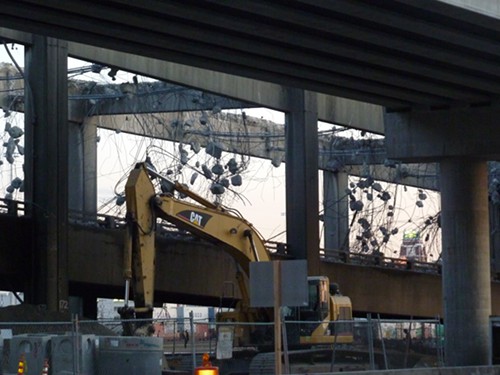 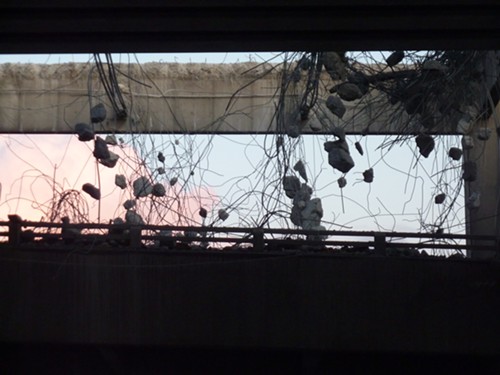 Then, onward again. Through some less-bike-friendly areas, over the low bridge to West Seattle, and there we were. Commuted. In what would have taken about 20 minutes if we hadn't stopped to gawk at the Viaduct destruction.
Aside from rain, which admittedly wasn't present yesterday evening, I don't know why anyone would ever do this trip in a car. Biking was easy, urban, beautiful, bracing—and I guess even a little historic given the demolition going on around us.
To get back, though, we treated ourselves to the water taxi, which only takes 10 minutes and costs $3.50 (with a bike). That was nice, too. 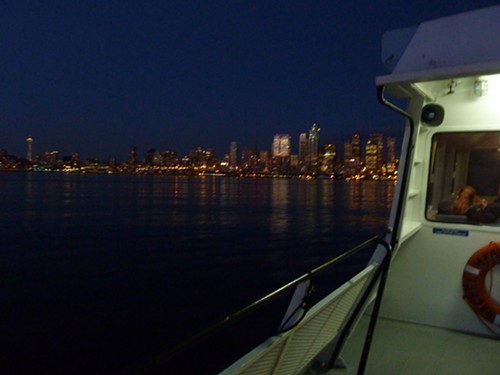