Thousands of union members, progressive activists, and Occupiers have converged on the National Mall in the other Washington this week to demand jobs and economic justice from a Congress that seems more interested in protecting tax breaks for billionaires than in addressing the concerns of the 99 Percent. Joining the festivities at Take Back the Capitol is a contingent of over 60 Washingtonians... including me. (Full disclosure: my own airfare and accommodations were provided by Big Labor.)

First up on the agenda was a march to the various congressional office buildings for unscheduled visits with our respective representatives, and I chose to tag along with a couple dozen Washingtonians as they attempted to tell their stories to Republican Rep. Dave Reichert (WA-08). It's a warm but rainy day in our nation's capital, and with thousands of constituents converging at the same time, the effort involved about an hour standing in the security line outside the Longworth Building, getting even wetter. Few were deterred, and once inside, we all set off to show our various congress critters what democracy looks like. Or at least, we tried. 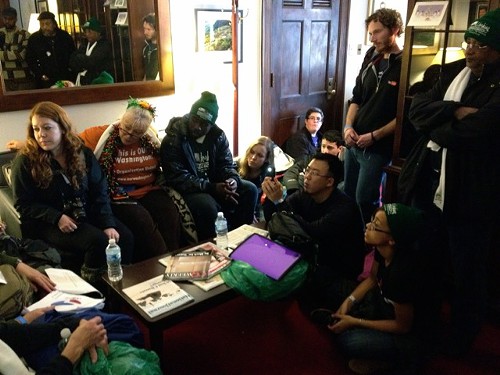 And then, after about half an hour of folks telling their stories of economic displacement to each other, Reichert actually shows up and talks. And talks. And talks, and talks, and talks. For a guy who was sooooo busy, you sure wouldn't know it. I've got about an hour of video of Reichert talking, with a little bit of him listening thrown in. The guy's got stamina. He lasted longer than my camcorder battery.

It's not like Reichert said anything much of substance (did you know he was once the sheriff?), but, well, at least he showed up. Which is a helluva lot more than can be said of most of his colleagues. From all accounts, only four of about forty targeted Republicans bothered to show their faces to their constituents. For example, a couple of floors down, Rep. Paul Ryan of Wisconsin pinned a note out front declaring appointments only, and then locked his door. Say what you like about Reichert (and I do), but at least he's not a coward like Ryan. And no, Reichert did not appear to be particularly brain-damaged beyond his baseline normal.

To be honest, it would have been a better story—at least from my perspective—had Reichert not shown. You know, like Cathy McMorris Rodgers, who haughtily snubbed the 99 Percenters who ventured to her office. But then, I don't create the news, I just report it. You know... usually.

Comments 14
Tags: Blogs Politics Occupy
The Stranger depends on your continuing support to provide articles like this one. In return, we pledge our ongoing commitment to truthful, progressive journalism and serving our community. So if you’re able, please consider a small recurring contribution. Thank you—you are appreciated!
CONTRIBUTE NOW