The Rick Santorum Rally in Tacoma Probably Could Have Gone Better

The ghost of Richard Nixon lingered over the Rick Santorum rally in Tacoma tonight. Washington State Republican Chairman Kirby Wilbur invoked Nixon's name during Santorum's introduction—Nixon was the last Republican presidential nominee to visit Washington before a caucus, Wilbur said—and Santorum launched into his remarks by invoking the 1960 presidential election as a similar moment of discord in our nation's history.

Dick Nixon was an appropriate figure to invoke, because like Nixon's presidency, Santorum's speech was plagued from beginning to end by angry young protesters. Members of Occupy Tacoma embedded in the crowd mic checked Santorum on several different occasions. (Occupy Tacoma headquarters were just 500 feet away from the rally site.) Marriage equality activists started a pro-gay-marriage chant that silenced the candidate for something like two minutes, and they encouraged passing traffic to honk in support of marriage equality and taxing the wealthy, adding to the general cacophony. The concrete plaza in front of the Washington State History Museum entrance, with its sweeping coliseum-style seating surrounded on two sides by abrupt, tall brick walls, was a perfect echo chamber, muddling both Santorum's speech and the shouts of protesters into one dull, angry roar. (It didn't help, either, that Santorum was lit from below, to eerie effect, during the speech, or that the podium in which he was speaking was directly above a pair of doors marked, creepily, EDUCATION CENTER.)

Not that the protesters were the only angry people there. Santorum drew a crowd of hundreds of angry Washingtonians to the event. One brave man carrying an anti-Santorum sign ("FREEDOM FROM RELIGION," on one side, "Stop the Drama, Re-elect Obama") was followed around the rally by several Santorum supporters pinching their noses and miming as though they were swatting away flies. "I can't stand the smell of this guy," one fly-swatter said, adding, "it's like he's got garbage in his pockets." An old woman told the nose-pinchers, as she squeezed past the whole scene, "Watch out for the maggots." Another woman clucked her tongue, and told her friends, "If you're an atheist, you'll just believe in anything."

Down at the bottom of the stadium seating, a retired farmer from Monroe spent the hour before the rally talking about how "draining" the last few days were for him. He spent them in Olympia, campaigning against gay marriage. He was one of many. A man carrying a sign that read "Go Rick/PRO-LIFE/PRO-NORMAL-MARRIAGE" ranted at a supporter of marriage equality who asked him what a "normal" marriage was. Gay marriage, the man explained, "is sick. It's against nature. Nature itself says it's wrong, not to mention the Bible." Santorum's decision to rally in Washington today was pure retail politics, and it was a shrewd political move; conservatives are mad as hell about today's marriage equality bill being signed into law. People at the rally couldn't stop talking about the gays and how much they didn't want them to marry. With the issue so fresh in their minds, conservatives will surely connect their feelings of anti-marriage-equality to Santorum, and not Mitt ("Massachusetts-is-for-lovers") Romney at the caucuses. One appearance by Santorum on today of all days was the equivalent of buying millions of dollars of TV commercials in the Washington market.

It's weird, then, that Santorum's most direct reference to marriage was his early remark that he's been married to his wife for 21 years. Rather than throwing meat to wounded Washington conservatives, Santorum played it safe and stuck to his plain old stump speech, when he wasn't being routed by Occupiers and other liberal activists. He generally tried the rope-a-dope on his protesters, smiling down at them and making some mild comments about how in America "we get to hear from everybody," but reassuring his crowd that Occupy Tacoma didn't represent "the real Washington." Only during one particularly lengthy interruption did Santorum allow his exasperation to show through, making a "this-sure-isn't-my-usual-room" comment to laughs among the audience that could hear him. His arguments against foreign oil were the first remarks that the entire audience could hear, followed by his boilerplate about wanting to be president of "100% of America." But when he launched into his anti-Obamacare—and, by proxy, Romneycare—diatribe, a train passed by on his right as a tractor-trailer truck blasted its horn on his left ("Must be a union trucker," a man next to me grumbled) and Santorum's usual biggest applause lines were somewhat dulled. 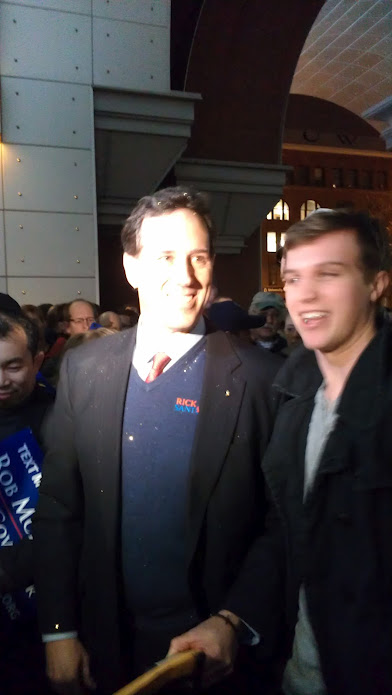 But not every punchline was squashed: the audience hooted and applauded as Santorum described the ways President Obama was shredding the Constitution. "Is this about contraception? No it is not," Santorum said, "It's about our rights." As he talked about the rights given to us by God as clearly stated in the Constitution, a liberal heckler to my left shouted, "3/5ths of a person!" The crowd around me cheered their agreement with his sentiment, even though I suspect many of them didn't understand exactly what they were cheering. Santorum told the audience to "give it up for Paul Ryan," told them that President Obama is "not a man who understands America," and scoffed at the idea that Washington wasn't a conservative state: "This is a blue state? No way. This is a state that treasures freedom and opportunity." Many self-described tea party members in the audience swooned over Santorum's small-government talk, but they also cheered his line that "we are that people of hope" who must have "the most powerful military on Earth," too.

After Santorum's remarks, Kirby Wilbur came back to the mic and told the audience to give themselves a round of applause for showing the Occupiers "what the real America looks like." The crowd pushed and pulled at a chance to shake Santorum's hand and get a photo with him during a lengthy and chaotic meet-and-greet afterward. About halfway through the handshaking, Santorum was glitterbombed. This was not just any glitterbomb, where a handful of glitter is haphazardly thrown at the candidate: Rick Santorum was glitter bukkake'd: He had glitter cascading down the front of his sweater vest, all down his back, through his hair, and his giant forehead shone in the flashes of photographs like Ke$ha had just vomited on it. But Santorum plodded onward with the weary grace of someone who had been sprinkled with glitter by strangers against his will many times before. He didn't shake everyone's hand, but he made an effort. And then he was whisked away.

(Find all of my photos from the event in this Google Plus gallery.)

Comments 60
Tags: Blogs 2012 Gay Marriage
The Stranger depends on your continuing support to provide articles like this one. In return, we pledge our ongoing commitment to truthful, progressive journalism and serving our community. So if you’re able, please consider a small recurring contribution. Thank you—you are appreciated!
CONTRIBUTE NOW