2
Nope, it's not make government smaller, it's funnel as much money to their owners as possible, any way possible. If that means increasing the size of government, like an insanely bloated defense budget, then they are more then willing to sacrifice the ideal of small government for more money to Raytheon, Halliburton, and McDonnell Douglas. Granted, they would like to privatize all aspects of defense if they could too, but it's not about minimizing the size of government, it's about maximizing profit. Government still has to be big enough to rake in the billions their masters demand after all. 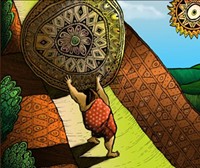 3
This drives me fucking crazy --- I was in Andy Hill's office a couple of months ago with a team from SEIU and had to listen with a straight face as he began lecturing us on our state's 'broken' systems. My face wasn't straight for long. If I'm driving my car down the street and the transmission falls out, I have a broken car. If I run out of gas, I don't have a broken car, I have a starved car. What could be clearer?
seanmichaelhurley on March 9, 2012 at 4:36 PM Report this

4
Then raise the sales tax. It's only fair and does the least damage.
In your heart you know he's right on March 9, 2012 at 4:41 PM Report this
5
I say both: To debilitate government so that there's no one to police the powerful, and to concentrate that government's efforts on aiding the most powerful to amass an even larger percentage of the total wealth. In effect, Republicans want to create a Third World country, and so far they're succeeding.
floater on March 9, 2012 at 4:48 PM Report this

7
Goldy, you're too kind. If the repubs were about small government, we wouldn't see things like Wall St. bailouts, an overfed incarceration industry, excessive military adventurism, etc.

"Small government" is just a thin veneer of phony principle laid over an agenda that has more to do with cheap labor and class warfare, furthered by the elimination of social services, safety nets, and protections from institutionalized misconduct. "Fascism" would be a more honest characterization of this agenda than the "small government."

So, why the weak language? And weren't you just calling the democrats a bunch of pussies the other day? ;)
Eric Arrr on March 9, 2012 at 6:06 PM Report this
8
State spending has not been shrinking for years in real per capita dollars.

You can find nominal state spending numbers here. You can inflation-adjust those values using this CPI calculator. The census only occurs every decade, but you find the 2000 and 2010 values anywhere and interpolate to get excellent estimates in intervening years. When you do this, you find only two biennia in which real per capita spending by WA state has dropped slightly: in '03-'05 spending was slightly lower than in '01-'03 and in the current bienium ('11-'13) it is slightly lower than in the previous ('09-'10). Real per capita spending by WA state increased in every other bienium, including the two ('07-'09 and '09-'11) that cover the great recession. Overall, real per capita spending by WA state has increased by 7% since 2000, from $10,000 to $10,700, both of those values being in 2012 dollars.

9
The problem with the out of control spending, is that both sides do it in different ways and both sides often refuse to compromise on curbing it because they're too busy attacking each other over it.

Kinison on March 9, 2012 at 6:55 PM Report this
10
@6: The least damage to people who can't afford to buy anything anyway. I don't worry about people who can buy a Lexus and I doubt you do either.
sarah70 on March 9, 2012 at 11:51 PM Report this
11
@7 (Eric Arrr): Technically, it's inverted fascism. With regular fascism, the government uses private corporations to achieve public ends. With inverted fascism, private corporations use the government to achieve private ends. And we're already there.
PCM on March 10, 2012 at 1:41 AM Report this
12
I'd like to see a breakdown of this along income lines, Seems to me, income inequality is such that , any real analysis requires looking at the tax burden on different classes, My instinct is that the lower income brackets are paying more of their GDP. Just curios.
stiffyspeedo on March 10, 2012 at 8:42 AM Report this
13
We need to get rid of state sales tax (8.9%) entirely and replace it with a flat income tax -- probably around 7.5% with a first $40k exemption. This would be a big tax cut for those most at risk and the money freed up would stimulate the economy (all of that exemption would be spent.) It would also flatten the YOY variation on tax collections.