So, Did Liquor Prices Go Up?

Joseph Staten
The answer is mostly yes—but not for all products. A comparison of a dozen brands of liquor shows Seattle shoppers paying, on average, 6 percent more at a Safeway and 12 percent more at a QFC today than they did at state-run stores yesterday. But those higher costs aren't obvious at first glance. 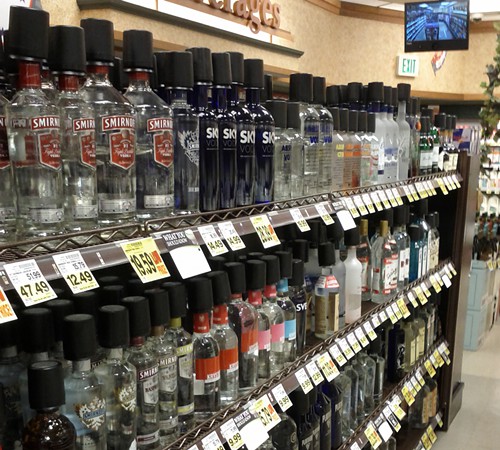 While many shoppers today were amazed at what appeared to be much lower liquor prices across the board, they might not have been aware that the grocery stores neglect to factor the 20.5 percent liquor tax and $3.77 per-liter tax into the price tags. The result is that the consumer must do a mental calculation before checkout to figure out what they actually need to pay—not to mention needing to remember what prices were at state-run stores in order to make any meaningful comparisons.
For example, a bottle of Campari at Safeway had a price tag of $31.99, but it was $41.38 with taxes—an $8.43 jump over yesterday's liquor store price (which was $32.95). A Safeway employee told me that customers have been repeatedly scandalized today at check-out with the unexpected price leaps at the cash register.
So how do the prices compare on the whole? I checked out the state-run liquor store on Broadway yesterday (RIP) to note the prices of a representative smattering of 12 popular liquors: Crown Royal, Jameson, Bacardi, Smirnoff, Grey Goose, Absolut, Tanqueray, Bombay Sapphire, Jim Beam, Jack Daniels, Jaegermeister, and Campari. And this morning, I did the same at the QFC and Safeway locations on 15th Avenue East. My highly scientific findings are listed below in detail, (including both pre-tax prices and the total cost when the two taxes are factored in), but here's the short version:
On average, the price tags alone for the dozen liquors were 13 percent less at QFC and 18 percent less at Safeway than the state stores. But, after factoring in the sales and excise taxes, liquors are—again, the average of these dozen products—12 percent more expensive at QFC and 6 percent more at Safeway than at the state stores.
The full list of numbers, my methodology, and more analysis based on my limited knowledge of arithmetic after the jump:
I used the significantly lower membership prices for the two stores (called Safeway Club and QFC Advantage), because if you buy liquor without a membership now you are out of your mind. Here are the results for 750 milliliter bottles with the lowest price for each liquor in bold:

The average of all 12 products:

Liquor Store: $26.28
QFC: $22.07
QFC (after tax): $29.43
Safeway: $20.84
Safeway (after tax): $27.86
Note to tequila drinkers: The liquor store didn't have one bottle left in common with the other two stores for comparison.
In the final tally (including taxes), the state-run liquor store had the best price for 7 out of the 12 products. Conversely, Safeway had four cheaper products and QFC had one cheaper product. On average, though, a bottle at Safeway now costs $1.57 more and and QFC $3.98 more than state stores.
So don't let those pre-tax prices fool you. QFC provides helpful signs to mitigate your sticker shock, but Safeway makes no mention in any signage that I could see. But remember, you can still save money on certain brands—you'll save more than $4 on Bacardi at Safeway today, even after taxes, than you would have paid at the state's store yesterday. It's just very difficult to figure out where you'll find savings, and where you'll find added costs.
By the way: My impression is that the fears many opponents of privatization had about a lack of a diverse selection at grocery stores are, on the first day, completely, unequivocally true.
Comments 95
Tags: Blogs Booze
The Stranger depends on your continuing support to provide articles like this one. In return, we pledge our ongoing commitment to truthful, progressive journalism and serving our community. So if you’re able, please consider a small recurring contribution. Thank you—you are appreciated!
CONTRIBUTE NOW