Did the Medical-Marijuana Industry Go Too Far Campaigning Against Pot Legalization Initiative 502 at Hempfest this Weekend? 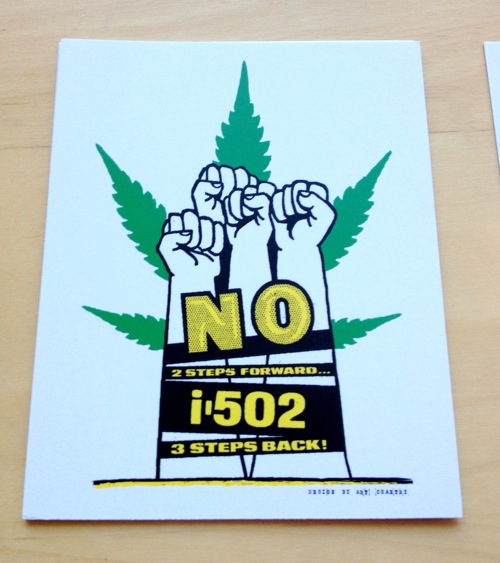 First let me say: I'm a bad man for criticizing anything about Hempfest. The organizers are volunteers, and only a bad man would criticize them. I'm also a total dick for saying that Hempfest could be more politically effective, because—admittedly—pulling off a giant pot rally is an admirable feat in itself. And I'm just a royal fucker for gleefully linking to photo #60 of this Hempfest bro proudly holding up his bag of Doritos. Finally, I should have written this post yesterday, when I was putting out the paper instead. But some not-super-nice stuff needs to be said, so I'll say it, even if that makes me a bad man, a dick, a total fucker, and lazy to boot.

With that out of the way... I went to Hempfest over the weekend.

Over 100,000 people were there, once again securing Hempfest's status as the world's largest pot rally. But for political purposes, it served primarily as a venue for dozens of medical pot dispensaries, several medical-pot-authorization groups, and countless Tim Eyman initiative petitioners to unite for a common cause: fighting a legalization initiative on the fall ballot. Sure, people talked broadly about ending the drug war, but Initiative 502 is the specific policy on the front burner. I-502 is the state's first chance to make it legal for adults to possess up to an ounce of pot, while regulating the cultivation of marijuana and licensing pot stores. Hempfest should be cooing for I-502. But instead, many Hempfest organizers oppose it and a medical-marijuana industry was out in force to kill it (I-502 would regulate a pot market that currently is unbridled). Which is to say, what used to be the biggest pot legalization gathering in the US earned the distinction last weekend, paradoxically, of also being the largest anti-pot-legalization gathering in the US.

The "No on I-502" signs, buttons, and pamphlets were thick from the front gates to the last stage, a mile down the waterfront. Some of I-502's critics clearly spent big money on campaign materials—in ways that may violate state election rules.

For example, two of the larger booths at Hempfest were run by 4Evergreen, a company that writes medical-marijuana authorizations. (Incidentally, two former 4Evergreen employees are also being charged by the state's department health for questionable practices selling authorizations at last year's Hempfest.) Throughout the festival, 4Evergreen displayed large banners and stacks of handbills declaring "No on 502." But they didn't identify who actually paid for these campaign materials. In the photo up at the top, for example, you'll see one of the flyers designed by Art Chantry that I picked up from the 4Evergreen booth—with no sponsor identification.

"All written political advertising, whether relating to candidates or ballot propositions, shall include the sponsor's name and address," says a state law concerning campaign reporting. Washington State Public Disclosure Commission spokeswoman Lori Anderson says that anyone making campaign literature qualifies as a sponsor. "The flyers need to have sponsor ID on them," Anderson explains by phone.

4Evergreen's director, Joshua Berman, says the his group worked "solo" on the anti-I-502 materials designed by Art Chantry and it doesn't need to include a sponsor ID because they qualified as "exempt" items (this is apparently according to his reading of list of exempt items in a state elections guide).

Indeed, there are exceptions to the sponsor-identification rules, including materials like yard signs, campaign swag like whistles, or newspaper articles. But Anderson says flyers produced by the hundreds opposing an initiative need to identify who paid for them. In addition, expenses for all campaign materials—t-shirts, signs, everything—must be reported to the state within five days, Anderson says. Asked if he will report the expenses, Berman says by email, "I'll talk to my atty and CFO about it, they'll be able to advice [sic] us appropriately as to all of the in's and out's of proper reporting."

When did Berman's group begin spending money? He didn't answer that question when I asked him twice. As of today, five days after Hempfest vendors loaded into the event with their supplies, the Washington State Public Disclosure Commission's website shows no reports from 4Evergreen.

But 4Evergreen's booth was only one of dozens of medical marijuana businesses advocating that voters oppose I-502 at Hempfest. On the one hand, their opposition seems partly cultural. I-502 is sponsored by former US Attorney John McKay, and the arrival of mainstream political bigwigs like McKay may be seen as stepping on the toes of a counter-cultural movement. On the other hand, that may be too generous. There's big money being made right now in the gray areas of state medical marijuana law, because none of these dispensaries are explicitly legal. A recreational pot market—as the initiative would create—represents a new financial threat to these businesses.

They certainly wanted my money—but I had to be a "patient."

I walked past a booth for West Coast Wellness. I didn't identify myself as a reporter, but a woman named Ariel started spontaneously giving me her spiel, so I wrote down what she said. She told me West Coast Wellness is a dispensary "partnered" with 4Evergreen (Berman says his group is not partnered with any dispensary), and she insistently suggested I pay to become a patient at 4Evergreen (she gave me a $20 coupon, bringing the price down to $180). Once I was a patient, she said, I could buy marijuana from her cooperative.

But I'm perfectly healthy and couldn't be a medical pot patient, I told her twice.

"I know it is crazy to say this," Ariel replied, "but most of our patients aren't physically sick." She said I "don't need medical records" to get an authorization from 4Evergreen, but once I got my authorization I would "be safe driving."

And the big beef comes down to driving.

On the issue of driving, I-502 critics were running around misleading people. At the official booth for No on I-502, a PAC run by medical marijuana dispensary operator Steve Sarich, a man who didn't give his name warned me that if I-502 passes, "They are going to bend us over and fuck us. All of us are going to be put in jail for DUI." He was hardly alone. A woman handing out paper fans with the logo of Conscious Care Collective, a dispensary in north Seattle, spontaneously warned me to vote against I-502, saying, "If you smoke, you can get a DUI the next day." Do you have any science to back up that claim, I asked? "I'm busy, I need to hand these out," she said, walking away with her fans.

Then there were the right-wing petitioners against I-502. Lots of them were petitioning for another pot initiative, I-514, but they said they were only being paid for gathering signatures for a separate Tim Eyman initiative. After they'd lure in voters with the pot petition, they'd give them the Eyman initiative, I-517. One such petitioner at the front gate told the throngs to oppose I-502 because, "If cops pull you over and you have any THC in your blood, you can go to jail." He also said people would get busted for driving the week after getting high.

None of that is true, of course. As I've reported ad nauseum, I-502 contains a DUI provision for adults driving with more than 5 nanograms of THC per milliliter of blood. That's far more than an undetectable level, and not one scientific study shows even the heaviest pot user above that level the next day. Most are below the level within a few hours. (Currently drivers can be convicted for any THC in their system while driving, so the initiative would actually be more progressive than current law.) 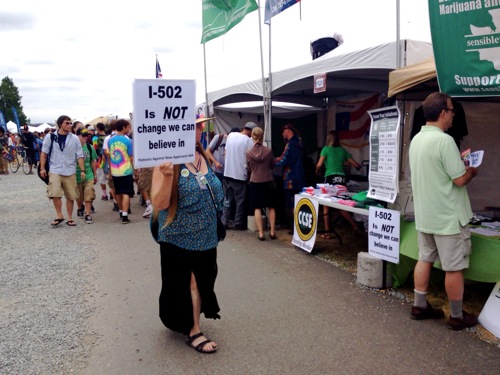 But it didn't stop pot dispensaries and right-wing initiative pushers from taking advantage of the crowd's political and legal naïveté—trying to convince them to oppose the best shot at legalization any state has ever seen.

There were more whoppers at the booth for a Bellingham dispensary, Northern Cross Collective, where a worker told a middle-aged woman that under I-502, "Medical marijuana patients would have to stop growing." That, too was dishonest: I-502 doesn't change the law for patients who grow under the state's Medical Use of Marijuana Act, passed in 1998. When I explained the law to the woman, she got got angry at the man, telling him, "People are being scared into thinking the world will come to an end if we pass this initiative, but that's not true."

The truth is, right now the medical marijuana law doesn't even protect patients from arrest. It only gives them a defense in court. I-502 would finally protect patients from being arrested. It would help patients more than any other law. The only thing it would hurt is the bottom line of the people making money off of them.

"They heckle us, swear at us, and give us the finger," I-502 volunteer Nathaniel Donahue said of the I-502 critics. After Hempfest attendees had passed the countless anti-I-502 signs and buttons, "A lot of people don't know what they're voting on—they don't even know it's about legalization," he said.

Next to their booth, staff at Fweedom Collective kept yelling, "No on 502" at the people trying to have a conversation with the Yes on I-502 volunteers.

As someone who used to be a director of Hempfest, I must say, it was bizarre to see Hempfest cultivating this anti-legalization environment. The organizers have purportedly stayed neutral, in part because festival director Vivian McPeak opposes I-502, but many on staff seemed to agree with him.

One volunteer for I-502 was dismayed by the way Hempfest volunteers treated him: "Hempfest staff is anything but neutral," said the campaigner who asked to remain anonymous. "As we entered we were heckled by anyone who saw us carrying 'Yes on I-502' merchandise or signage and this continued all day. We were met with hostility by at least 90 percent of the Hempfest staff who would often times simply walk by screaming 'no on I-502.' One man just stood there screaming 'fuck you!'"

And it's too bad. Hempfest has claimed to be all about legalizing marijuana and creating a positive environment. It didn't. Instead, it gave opponents a platform, while Hempfest leaders cowered.

Sorry, Hempfest organizers, but legalization is going to come with big-kid, all-grown-up-now rules. That means rules for DUI, licenses for growers, taxes, and all that stuff that comes with regulating an agricultural commodity. And now that your movement finally made it to the big time, it seems to me that some greedy folks who prospered under prohibition are whining that they like the old system. Of course they do: They're making money hand over goddamn fist under the old system. And they will always come up with a complaint, just as specious as these dishonest complaints they raised at Hempfest this year. If another initiative comes around, they'll have more complaints about that one.

But Hempfest didn't stand up to those people when it counted most. When the sound, thoughtful, well-funded initiative was on the ballot in a presidential election year, Hempfest caved.

I hate to say it—because it makes me a bad man, a dick, a fucker, and all that—but if Hempfest can't stand up for legalization when it matters, it isn't a pot legalization rally. It's just a smoke-in.

Comments 142
Tags: Blogs Politics
The Stranger depends on your continuing support to provide articles like this one. In return, we pledge our ongoing commitment to truthful, progressive journalism and serving our community. So if you’re able, please consider a small recurring contribution. Thank you—you are appreciated!
CONTRIBUTE NOW