"What we are doing today is living up to the founding ideals of this country."

Just before 12:01 a.m. last night, as King County Executive Dow Constantine was preparing to personally issue some of Washington State's first same-sex marriage licenses, he took a few moments to recall how long gay couples have been coming into the King County Recorder's office and asking for them.

He mentioned Paul Barwick and Faygele ben Miriam. Those two men showed up asking for a marriage license in 1971, more than 40 years ago, and when their request was denied they launched one of the first gay marriage lawsuits ever seen in America.

Here's something to consider, though: It was Lloyd Hara, then the King County Auditor, who denied those men their marriage license back in 1971, following orders from his superiors. Hara is now the King County Assessor, and a strong backer of marriage equality, and he recently walked his lesbian daughter down the aisle at a ceremony in Vermont. "How times have changed," he said earlier this year.

Constantine put it this way: "What we are doing today is living up to the founding ideals of this country."

When that challenge failed in 2006, with the Washington State Supreme Court upholding our Defense of Marriage Act 5-4, Sims stood at a rally outside the King County Administration Building and yelled: "This decision will not stand the test of time. One day we'll open these doors and people will find justice—the right to be married." 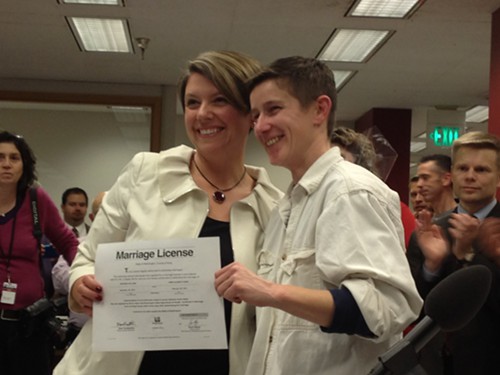 Constantine mentioned Cal Anderson as well. He was Washington's first openly gay state legislator, a man who tried but never succeeded in getting a basic gay civil rights bill passed in Olympia. Near Constantine was Sen. Ed Murray (D-Seattle) who, nearly 30 years after the idea of a gay civil rights bill was first raised, finally succeed in getting one passed in 2006.

Near Murray was Rep. Jamie Pedersen (D-Seattle). Together, he and Murray were part of the team that pushed civil unions through the legislature over the next few years, and then this year pushed through a marriage equality bill that repealed our Defense of Marriage Act. Also nearby: Anne Levinson, who, when it was clear our new marriage equality law was going to be challenged at the polls this fall via Referendum 74, fought in court to get fair ballot language for the measure. 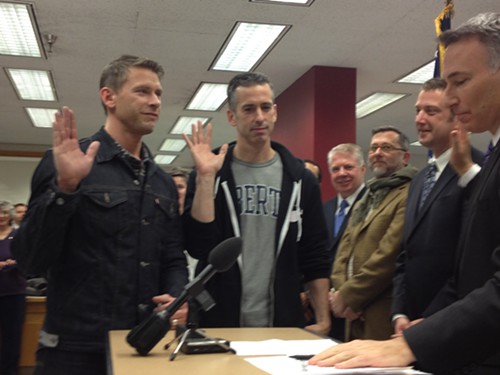 "This has been a battle that has been fought by people who are notable," Constantine said, "and people who labored in near anonymity."

As he signed their marriage licenses, he did so with a pen that was used by Governor Chris Gregoire as she signed the marriage equality bill. 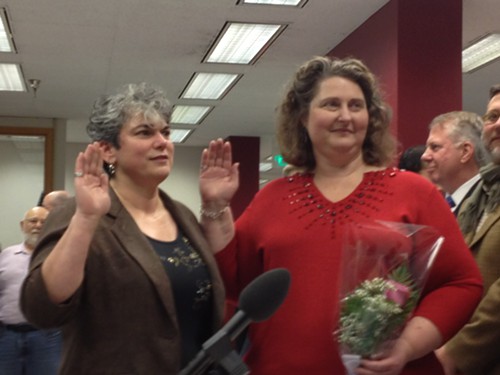 Outside, on that same plaza where in 2006 Ron Sims said "one day we'll open these doors and people will find justice," people were now cheering the newly-about-to-be-married couples. "I'm so fucking happy for you!" read one sign. "Thank you," read another. "This economy needs gay weddings." 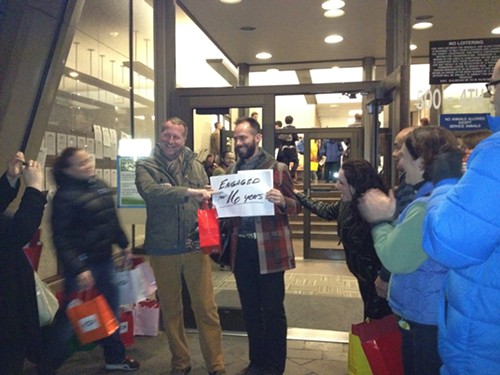 On the other side of the building, other couples were still lined up, waiting to get in. There was time. The administration building would be open all night, and the county was estimating that by 5 a.m. this morning somewhere between 300 and 400 couples would be newly licensed.

Including, perhaps, these guys: 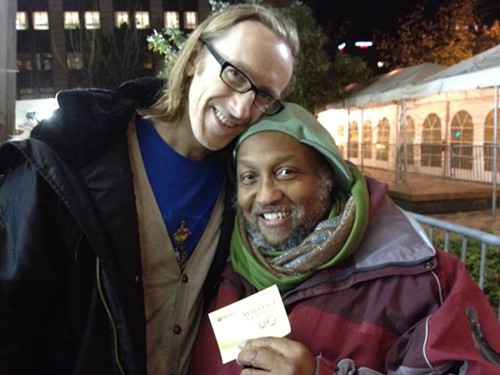