...so they're borrowing a page from racist bigot playbook. Like racists who created segregated proms after high schools were integrated in the 60s and 70s, the haters at Sullivan High School are creating a separate and segregated prom for straight (and closeted) kids only:

Several parents, students, and others who believe gays should be banned from the Sullivan High School prom met Sunday at the Sullivan First Christian Church. "We don't agree with it and it's offensive to us," said Diana Medley.

Their idea is to create a seperate [sic] traditional prom. Students say there are several others from their high school who agree, but are afraid to take a stand. "If we can get a good prom then we can convince more people to come and follow what they believe," said student Kynon Johnson. And now they want everyone to know where they stand. "We want to make the public see that we love the homosexuals, but we don't think it's right nor should it be publicly accepted," said a local student.

Let's pause here for a moment to feel the love. Because nothing says "love" quite as clearly as "you're not wanted and God hates you." Okay, back to NBC 2's Paige Preusse:

Diana Medley is a special education teacher in town. She doesn't believe anyone is born gay. "I believe that it was life circumstances and they chose to be that way; God created everyone equal," said Medley. "I don't understand it."

Let's pause here to grieve for all the special education students in Sullivan, Indiana. Students with learning disabilities have it hard enough without getting stuck with a mentally challenged special ed teacher.

You know else has it hard enough? I imagine queer kids growing up in Sullivan, Indiana, population 4,249, have it hard enough without having to watch shit like this on the evening news.

The anti-gay haters at Sullivan High have a facebook page: 2013 Sullivan Traditional Prom. One of the organizers of this hate group would like us to know that "this is not a hate group." 2013 Sullivan Traditional Prom is just a group that has been organized with the sole purpose of creating an alternate prom that excludes gay, lesbian, bisexual, and transgender students and to achieve that end the group's members are calling LGBT kids "offensive," sick, and sinful. What's hateful about that? Besides, you know, everything?

Send an email to the principal of Sullivan High School, David Springer, and to the school's assistant principal, Sarah Hannon. We don't know where the school stands on the alternate Hater Prom—at least not yet—so don't give the school administration a hard time. Write in support of an inclusive prom and ask them to speak up in defense of the queer kids at Sullivan High School.

UPDATE 1: Holy shit. I just watched the video of the interview with Diana Medley, special education teacher, which you can see here. The story on the station's website didn't include Medley's full remarks. Here's the missing part:

PAIGE PREUSSE: A gay person, um, do you consider them, maybe, do [you believe] they have some sort of purpose in life?

Take a good look at the condescending, hateful smirk that spreads across Medley's face when she was asked if gay people have a purpose in life... 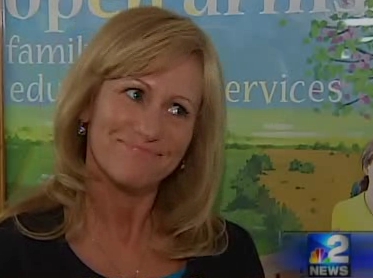 ...and then imagine you're a gay kid in special ed in Sullivan and this hateful bigot is your teacher.

Diana Medley's email address is medleyd@nesc.k12.in.usf. (Please be respectful if you email Medley. Blowing up at her won't help and it only plays into the Christian right's "but we're the real victims of intolerance!" line of crap.) There's also an online petition calling for Medley to be disciplined.

UPDATE 2: A Sullivan High School student offers this clarification in the comments thread:

I am a senior at Sullivan High School. Just to let all of you know it is NOT the school that is banning same sex couples! I hate how the school is being made out as the bad guy—that is not the case at all. The only prom that's banning [LGBT students] is the "traditional prom" that is being held somewhere else (it is not supported by the school).... Sullivan High School is ACCEPTING the same-sex couples and the staff at SHS is for the same-sex couples going and so are the majority of student and people in the community! I absolutely hate how my town is getting called Anti-Gay Bigots because a few "Christians" are planning a separate prom! Not all of Sullivan is like that I can damn well guarantee it. So please stop saying all of Sullivan County is like that because we aren't. My date (who is a guy) and I are attending the school prom that is ALLOWING same sex couples to go!

That was the impression I got from the news story—which was pretty muddled—and it was reflected in the headline and in my advice to go easy on the school administrators. But now that we know where the school administration stands—with all the kids at Sullivan High School, queer and straight—please send letters to the principal and the assistant principal thanking them for supporting an inclusive prom.

And Treefort puts things in perspective in the comments thread:

I think it's actually progress that they're holding their own bigot prom rather than trying to ban the gays from the real prom. They know that doesn't work anymore, they know they're losing. I hope lots of straight but non-hatey students roll their eyes and go to the real prom. And yeah, I'm sure lots of abstinence only teens will get knocked up after bigot prom.

[My mom] was faced with a barrage of phone calls all day long. Everything from the condescending quandaries of “how many doves have you released this month?” to the more affirming interviewers who truly want to know the church’s side of the story. Along with the phone calls came many other, terrible things. The fax machine was printing a constant flow of gay pornography, to the point where they decided just to turn it off.... Diana Medley didn’t have to deal with these images and messages and calls all day long. Neither did any of those students who were so “appalled” at gays that they couldn’t stand to see them at their proms. Nor the narrow-minded parents. My mother is the one who had to deal with that whole mess all day. And she didn’t even have anything to do with it all.

Now there’s all this national attention and everyone has an opinion and wants to get in their say. Blind assumptions made in haste often lead to lashing out in hate and anger at those who are simply innocent bystanders. Those people calling my mom don’t know anything about her. They don’t know about her five kids and how much she loves her husband. They also don’t know that she had a brother who was gay. He died of AIDS in the late eighties. I wonder how differently some people who called might have treated her had they known that.

But I do have to take issue with this:

The Sullivan First Christian Church made national headlines recently due to being the meeting place of a small group of people getting together to discuss plans to host an alternative “traditional prom” where gay students will not be allowed. Unfortunately, the media made it seem as if the church was behind the meeting and supported it. And this is simply false. All the church did was open its doors for the community members to meet.

And finally: The haters have pulled down their Facebook page. But we've got some screen grabs after the jump. 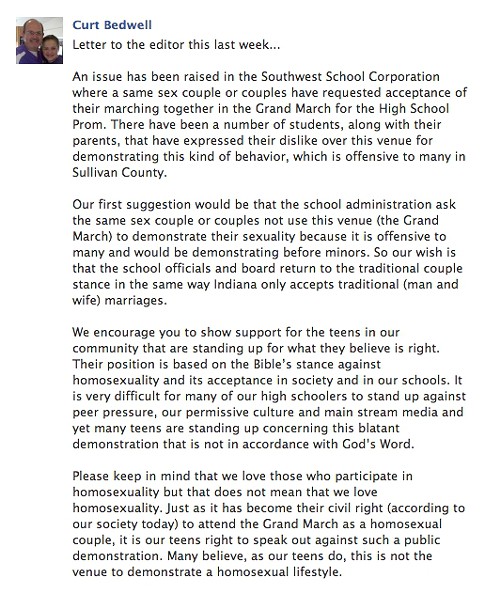 Comments 193
Tags: Blogs LGBTQITSLFA
The Stranger depends on your continuing support to provide articles like this one. In return, we pledge our ongoing commitment to truthful, progressive journalism and serving our community. So if you’re able, please consider a small recurring contribution. Thank you—you are appreciated!
CONTRIBUTE NOW