Why They Break Windows

It's been three weeks since May Day, and the reverberations from the day's mayhem continue. At a court hearing last Thursday, two young men accused of throwing rocks at the police were arraigned in King County Superior Court. That evening, Seattle police posted to their website asking for tips from the public on eight suspects, complete with videos that appear to show young men smashing windows with rocks and skateboards.

"I could feel my temper rising as I watched this thing fall apart," KIRO radio host Dave Ross told Mayor Mike McGinn the day after May Day. "Why have they adopted [Seattle] as their playground?" his co-host asked.

"There is a desire to provoke a confrontation with the police, so then they can claim the police overreacted," McGinn said. "This is in fact the objective of the march."

"I speak for the majority of Seattle when I say fuck you all and your stupid white privilege that thinks you can walk around smashing shit up, yelling and throwing shit at the police," wrote one typical Slog commenter.

It's easy to stereotype window-breakers and rock-throwers as spoiled kids throwing tantrums, out with malevolent intentions to mess with the police, and then feel indignant about it. But truth be told, those are lazy, inaccurate assumptions.

At the court hearing last week, it became clear that the two guys being arraigned are homeless. The prosecutor argued against letting them go and called them "threats to community safety."

But the judge released 18-year-old Joshua Irwin-Patterson back into "clean and sober housing," run by the Juvenile Rehabilitation Administration (JRA), until his June trial. A JRA employee testified that under her supervision since 2011, Irwin-Patterson had been "doing well."

Twenty-one-year-old Marcel Davis, who is black, would return to the homeless youth Orion Center if released, his attorney said. He's being charged with second degree assault for allegedly throwing a rock that broke a police officer's kneecap. The judge decided to continue jailing him on $60,000 bail.

Of the 17 people arrested on May Day, "about nine" are homeless or without stable housing, according to Lizz M. (she prefers not use her last name), a Seattle University student who's helping raise money to defray their legal costs. "Four or five identify as queer. Two are juveniles," and "two or three" will be judged in mental competency hearings. At one point during his hearing, Davis seemed to have trouble understanding a simple question.

The narrative of pampered lawbreakers "makes me so angry," she says. "What else can you expect from a life like that. You're on the street," she adds, referring to Davis. According to police reports last year, he has the mental capacity of a 14-year-old.

"It's a little alien to me," Mayor Mike McGinn told KIRO. "I just never considered throwing a rock at a police officer as part of the toolbox of change."

Of course it's alien. There's a great deal of social distance between someone like McGinn, a lawyer turned mayor, and most of those who allegedly smashed things and were arrested. Most activists in Seattle channel their ideas and feelings into more productive forms of protest. But those who were arrested aren't like most activists.

Because the average person wouldn't break random windows. In fact, broken windows are a bit like terrorist attacks. And "blowback" is a useful frame through which to analyze both.

The CIA first used the term "blowback" in a 1954 report on the coup d'etat, which the agency helped carry out, against Iran's prime minister Mohammed Mossadegh. It has since become a shorthand for the "unintended results of American actions abroad." Last month, while Dzohkar Tsaernaev hid in a boat, he reportedly scrawled a note describing the Boston bombings "retribution" for attacking Iraq and Afghanistan and calling "the victims 'collateral damage' in the same way Muslims have been in the American-led wars."

Who could have guessed? And yet our civic leaders don't talk about blowback. Instead, we profile Muslims in America, and we keep on bombing and droning and killing Muslims overseas. We heap scorn upon the few misguided, radicalized, and ultimately malicious individuals who've carried out terrorist attacks.

We can take the same approach towards anarchists and people on the margins who gravitate towards radical movements in the Pacific Northwest, trying to criminalize their dissent—or we can try to understand their actions (which is not the same as endorsing them) and defuse the tensions that lead to them.

To be absolutely clear: Being an anarchist, breaking a window, or throwing a rock at the cops is not terrorism, full stop, despite the FBI's attempts to conflate them.

But bombings and smashings represent blowback against a game where the rules, to some people, seem fixed and grossly unfair. In the Middle East, it's American hegemony. In America, it's hegemony of the upper class. Breaking a window is an attention-grabbing way of saying, "Fuck those rules."

"People will follow rules they feel they understand and agree with. And they will follow rules that they helped create," explains Joe Brewer, a hyper-articulate linguist and director of the Seattle-based firm Cognitive Policy Works. I called Brewer because he's the mind behind an initiative called The Rules.

"The reason we called it 'the rules' is that this is the core narrative that plays out through all these structural problems," Brewer says. He lists issues like wealth inequality, poverty, institutional sexism, and environmental collapse. "Pick your issue, and you can see how the rules were constructed to make it so... Poverty doesn't exist by accident."

The Rules' latest campaign targets tax havens, where Brewer says some $21-30 trillion has been stashed by corporations and the rich. Brewer also talks about changing the legal definition of a corporation to eliminate the psychopathic mandate for maximum profits.

"When someone engages in a violent act, that's usually an exasperated response of someone who feels powerless in some way," Brewer says of the May Day window-breakers. "Anger against authority figures comes about when people think the authority figure has betrayed them," he continues. "The most special kind of hatred anyone has is betrayal."

It's safe to say Bryanna Stader, 27, feels betrayed. She's a soft-spoken recent arrival in Seattle from Olympia. Her mom's a nurse and she's never been in police custody before, she says. 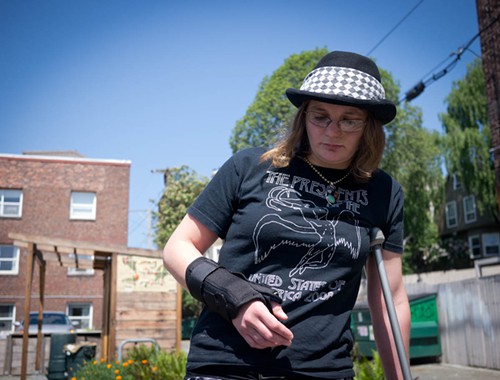 But when police arrested her on May Day and then took her to the emergency room that evening, "It was definitely a different experience. When I asked for water they just ignored me and walked away. They didn't give me any ibuprofen or ice for my swelling... On my ER report, it just says I fell."

She says her injuries stemmed from the "excessive force" police used arresting her. "I remember the police yelled 'arrest.' I was grabbed from behind, and my arms were lifted up above my head," she says. "I remember seeing my feet not on the ground any more and then my face hit the ground... And then when I got out of the police car, I couldn't walk on my foot."

Stader, who works at Subway, isn't sure if her wrist is fractured or just bruised. Her boss advised her to take time off of work until she's healed up. According to the police, she shoved an officer and struggled during the arrest. She denies that and is pleading not guilty to obstruction charges.

"I definitely learned a lot, about the inner system," she says. "Like how the way the police and the hospital kind of seem to be together. And that makes me paranoid and not trusting."

As I mentioned anarchists in a question, Stader interrupted to say she doesn't know what the word really means. "I went down there to just learn about different groups because I know there's something wrong going on in this country. And something should be done to stop it. I'm not an anarchist. I wasn't there to hurt anybody or anything. I just got caught up."

As did I, nearly getting pepper sprayed by police while filming the scene and holding up my press badge. SPD spokesman Sergeant Sean Whitcomb watched the video of the incident, but was unapologetic. He said all uses of force are under review, but that pepper spray was deployed as a last resort and means of self-defense once "bottles, metal bars, and fireworks" had been thrown.

But the officers clearly are not using pepper spray in self-defense. Look at the frame by frame. 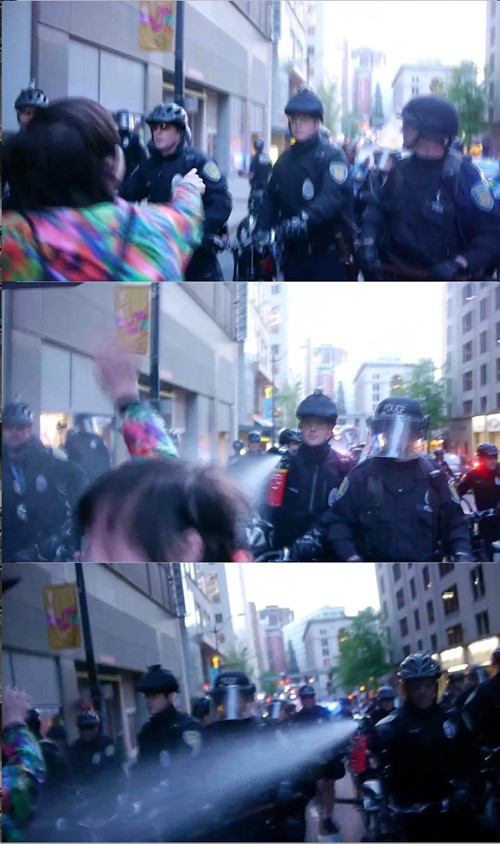 They deliberately spray individuals who aren't attacking them. "You're not far off the mark," Whitcomb said, finally opening up some wiggle room. "They weren't doing it because they were afraid of you, or [reporter] Erica Barnett, or the guy in the mohawk...they were doing it to move the crowd, which was hostile."

"I now understand on a visceral level what it's like to feel betrayed by the people we pay to protect us," Barnett wrote the next day.

Here's where the parallels I drew earlier with "the war on terrorism" become almost eerie. "When a lawful order [to disperse] is given, it basically means to leave the area. Not everyone but shoppers, or everyone but reporters, but everyone," Whitcomb continued.

He pondered aloud whether for next year's May Day reporters should wear neon-colored clothes or be issued special press passes into the area by the police. I immediately thought of reporters in warzones who have PRESS emblazoned on their vehicles and vests.

Whitcomb is essentially saying it is not incumbent on Seattle police officers to use force carefully and judiciously, as former SPD chief Norm Stamper advocates. Instead, it's everybody else's responsibility, from bystanders to reporters, to not become collateral damage.

Coincidentally this week, Pentagon officials argued in a congressional hearing that the entire globe is a battlefield.

Comments 81
Tags: Blogs Politics
The Stranger depends on your continuing support to provide articles like this one. In return, we pledge our ongoing commitment to truthful, progressive journalism and serving our community. So if you’re able, please consider a small recurring contribution. Thank you—you are appreciated!
CONTRIBUTE NOW