That was the rallying cry as around 200 demonstrators, several of them fast-food workers who'd walked off the job for the day, marched from Denny Park to McDonald's at Seattle Center, stopping by a Subway and a Taco del Mar along the way, trying to convince the workers to walk off the job.

They failed to convince the employee at Taco del Mar, a Latino man who later told me: "They can do whatever they wanna do, but I don't like to be pushed into anything."

But, after several minutes of conversation, a few Spanish-speaking activists succeeded in convincing a young woman at the Subway to leave the shop and lock the doors. The crowd went wild as she smilingly made her way into their midst. She spoke briefly into a microphone in Spanish, saying, "I'm very happy that you're doing this. Si se puede!" 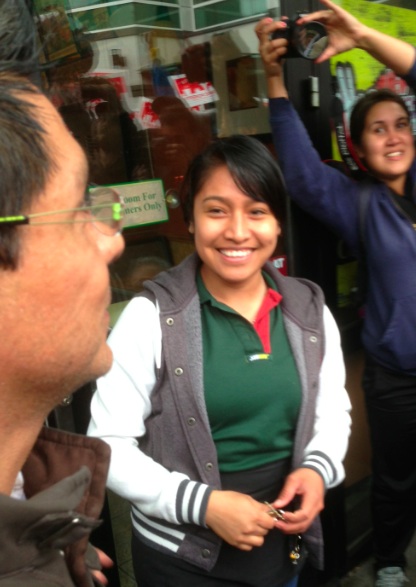 Meet more of the striking workers, and hear about what happened at McDonald's—which ended with a very disgruntled franchise owner complaining to police that the crowd had committed "criminal trespass," the police gently arguing that they had some duty to protect freedom of expression, which the owner countered with saying that he contributed to the SPD foundation—below the jump. 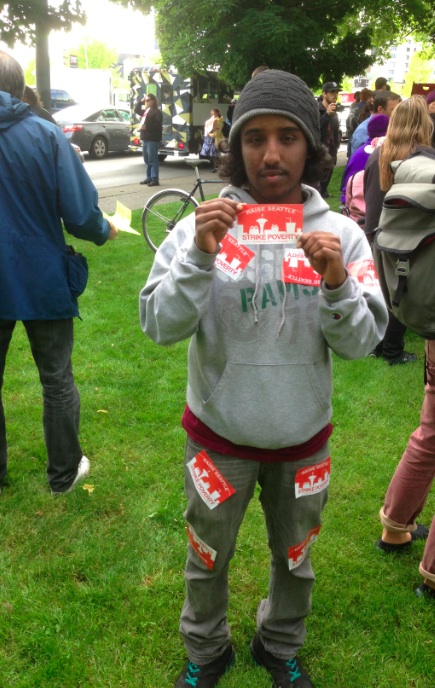 He says he works at a Subway at Fourth and Lander and was striking today—it was the first moment of activism he'd ever engaged in. "I'm not here to target the owners of the [individual] store," he said. "I'm here to target the the big corporations that make all the money but make it so unavailable and need to share more with the workers."

He said he works 30 hours a week. I asked if he wanted to work more, to go full time and make benefits. "No matter how many hours you work for $9.50, you can't make it. The people who created the minimum-wage requirements don't understand how it feels." He says he has worked with single parents who are working but still relying on food stamps. He doesn't have kids, he says, "but I'm not here for myself—I'm here for a collective, for people who can't voice their opinion because they have fear, and can't afford to lose their jobs."

I asked if he was afraid of losing his job. "I'm not scared because we're all in this together," he said. "We're striking! This is America!" 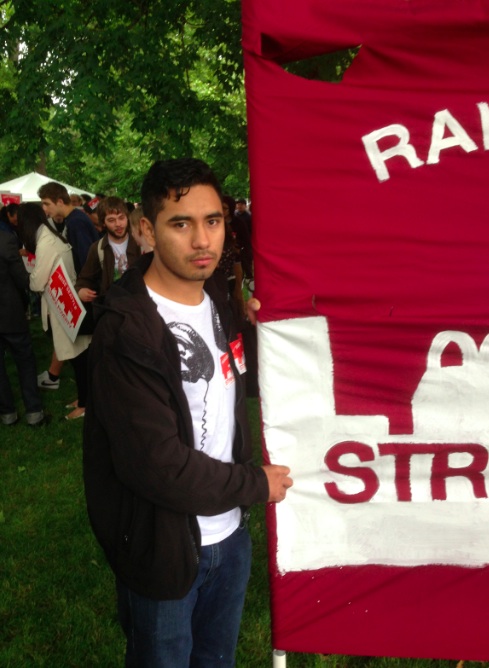 He's been working in fast food for six years, since he was 16—Jack in the Box, Quizno's, Sbarro—and says "they're all the same." He's now at a Taco del Mar at 42nd and University. He says only three employees work there and he and another of his fellow workers were striking today.

"There is a lot of struggle" in the industry, he said. "When people feel this poor, they feel invisible." This was also his first moment of activism. "This is great," he said, "this is amazing—to make the corporations think again about how they're running their business, about what's wrong and what's right."

He also talked about single parents stretching their dollars and, like Abdirashid, said he was there for those people, "trying to get them out, letting them know there's nothing to be afraid of."

He said he lives in the Central District, which is "very expensive" and hopes demonstrations like this will "improve our wages."

Then the crowd began to chant "hold the burgers, hold the fries, make my salary super-size" while someone played "Celebration" by Kool and the Gang. Then the march began. 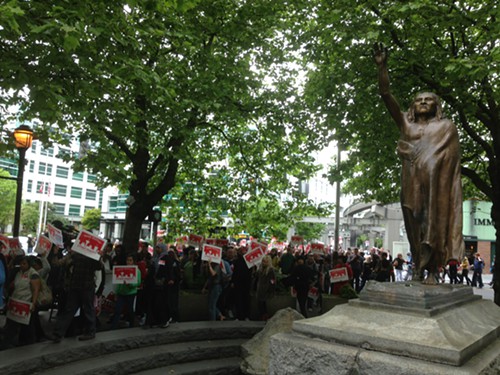 Once it passed by Taco del Mar... 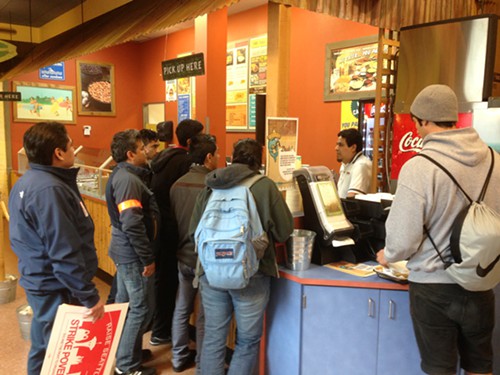 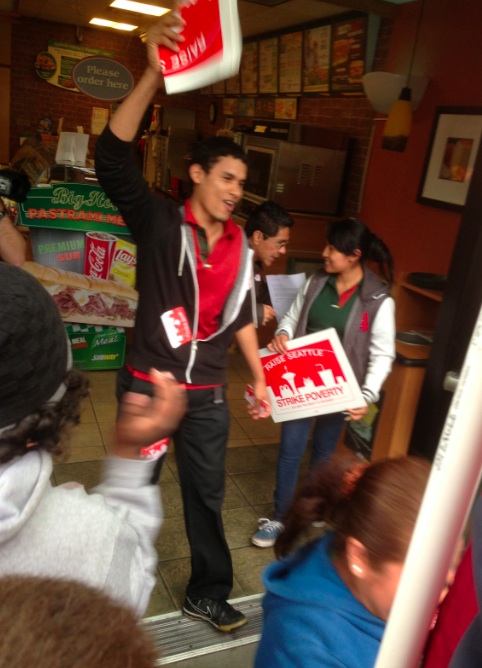 ...the crowd marched to McDonald's. I showed up ahead of time, where a stern-faced manager type was on the phone, telling someone to call the police. The crowd charged in and occupied the McDonald's for several minutes, though nobody walked off the job. 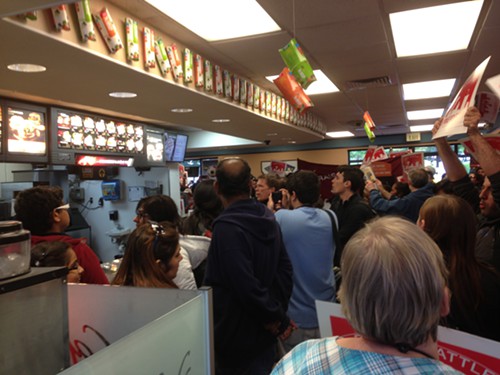 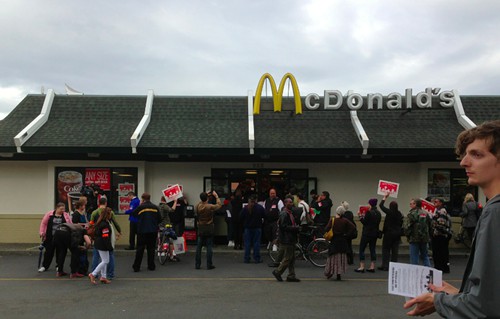 The police showed up, a protest liaison talked with them, and communicated the order to disperse. So they did, leaving signs and stickers on the windows, with a chant of: "We'll be back! We'll be back!"

I lingered, to listen to a man I think was the franchise owner complain to police officers that they hadn't charged in. The officer patiently explained that (a) they had to walk a "funny line" between protecting private property and protecting freedom of expression, (b) if the seven officers on the scene had charged into a situation with 200 demonstrators, the restaurant would've been trashed, and (c) that all in all things had gone pretty smoothly—the demonstrators had made their point and the store was intact.

The maybe-owner said "we support you guys, we're members of the foundation." The officers said they appreciated that and nothing more.

The maybe-owner shook his head and said: "I just never thought these guys would be bold enough to enter the restaurant."

The officers nodded and sauntered off.

There were several TV news cameras on the scene. Film at 11, as they say.

Comments 112
Tags: Blogs Occupy Labor
The Stranger depends on your continuing support to provide articles like this one. In return, we pledge our ongoing commitment to truthful, progressive journalism and serving our community. So if you’re able, please consider a small recurring contribution. Thank you—you are appreciated!
CONTRIBUTE NOW