This guest post is by Fnarf, a Seattle resident.

That's what you wanted, right? We were going to tear down that nasty old viaduct and replace it with a new highway in a tunnel below, and then build another highway on top of it, right? With lane after lane of cars and parked cars and buses and trucks, right?


Well, that's what you're getting. The traffic engineers in charge of redesigning Seattle's waterfront in the wake of the Alaskan Way Viaduct's removal, Waterfront Seattle, have released their newest report, and it is remarkable for how unimaginative it is. And how devoted it is to duplicating the unbelievably massive streets it replaces. More, in fact; at its widest point (shown above) there are more traffic lanes than if the two decks of the viaduct were laid side by side.

The report contains all of the usual puffery we are accustomed to seeing; the pictures of laughing children and rollerbladers and leafy foliage bursting out of every corner. But, as usual, what is missing from these photos is a city. The planners know how to build roads, so they build roads, but they have no idea how to build a city, so they just airbrush it out. Photoshop a bunch of trees in front of it.

All of the amenities they are so proud of—the walkways and benches and plantings and wide-open spaces—are planned for the already-existing areas on or in front of the piers. They could do those things anyways. But where the viaduct is now is nothing but a big old ultra-wide highway. Oh, it's been tarted up like a prostitute and called a "boulevard," like they got in Gay Paree (leaving aside the fact that the Champs-Élysées is the most boring street in Paris, just as the Paseo de la Reforma is the most boring street in Mexico City), but it's a highway. Look, here's a picture in their own document of the types of vehicle this was designed for:

The problem with this highway, besides the fact that there's going to be another brand new one right underneath it (costing billions) is that a highway is a way to get THROUGH a place; it is not itself a place. It is not a city; it's a way to get to a city. The city itself needs to have life and color and commerce. The bluenoses who have always run Seattle have always hated filthy commerce, but busy, even chaotic street-level commerce is what makes cities hum: the West Village (or Flushing Main Street) in New York; Covent Garden in London; Rue de Buci in Paris; El Centro or La Condesa in Mexico City; the laneways of Melbourne; Bologna, Italy. Even here in Seattle, which is more interesting, Pike Place or East Marginal Way? 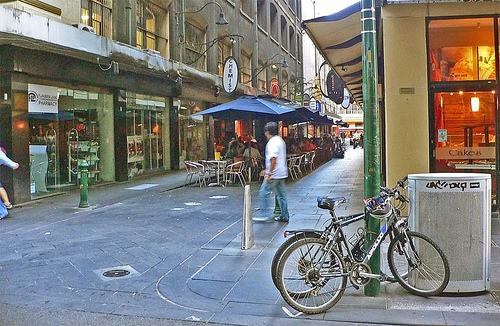 This project was supposed to "connect the waterfront" back to the city. But now instead of strolling unmolested under an unsightly (to some) elevated highway, you'll have to wait at not one but two traffic lights for cars and buses and trucks to pass — the intersections are so wide that you'll have to stop halfway across at a planted meridian. Yes, it's nice that there's a dedicated bikeway. But even aside from the traffic lanes, why so much nothing? 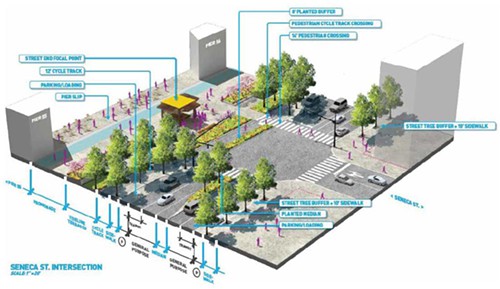 And speaking of planted areas, the pictures show some spectacular ones, because in architectural illustrations it's always the loveliest day in summer. But in reality it's often fall or winter, and it's raining, and the plantings, like all public plantings everywhere, have been allowed to bolt and go to seed, dry out and turn brown and fall over, get covered in truck exhaust, fill with cigarette butts and trash and dog excrement (or worse). Has anyone ever struggled through places like Lake City Way or Aurora up in Shoreline, where the meridians and buffers and verges have been planted, then ignored, and thought, "Yes, this is great, I'd love to have more of this in the heart of the city"? No?

I think this is a massive lost opportunity, and a great waste. Seattle needs exciting areas full of neon lights and bright signs and cafes on the sidewalk and narrow streets. This is what makes a city: a lot of people living close. And what makes a city is not open space, not highways, but buildings smashed together in ways that leave the streets that communicate between them in an assortment of T-shapes and V-shapes and curves and narrowings and openings that send the painters of lane markings into a tizzy but the lovers of civitas into delight. If you seek delight, don't build this hideous road in the middle of your city. We have enough lanes already. Get rid of these. One lane each way, if you must, and a place to put the ferry traffic. Fill the rest with CITY.

I leave you with the words of Ivor de Wolfe, in his great book The Italian Townscape

It was, that is to say, not a matter of laying out a street and aligning buildings along it, but of arranging a building group according to its requirements and then leaving an alley on the outside between one group and another. An academic distinction so long as modern corruptions obscure the street's essential nature as a precinct, a playground, a home-from-home, an escape—almost a retreat [...] And true to its ideal as playground as well as service area the street spawned caves, inns, stalls, shops, the appurtances of leisure, and in the process took on the aspects of a fair with the appropriate accompaniment of visual hazards in aid of cosiness, gaiety, and convenience.

Thanks to Tom Fucoloro at Seattle Bike Blog for bringing this to my attention.

Comments 131
Tags: Blogs City
The Stranger depends on your continuing support to provide articles like this one. In return, we pledge our ongoing commitment to truthful, progressive journalism and serving our community. So if you’re able, please consider a small recurring contribution. Thank you—you are appreciated!
CONTRIBUTE NOW