I Find Myself In a New Book About Neoliberalism 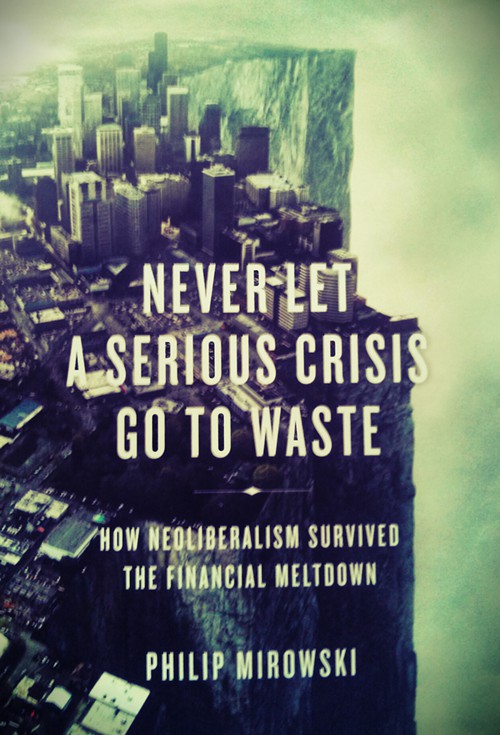 The first thing I noticed is the city on the cover of the book, the city on the edge of a crumbling world—that city is none other than my city, Seattle, the home of the first major challenge to neoliberal globalization. Soon after beginning the book's second chapter, I was surprised by a passage in a section concerning writers and thinkers who thought that we "were living through the demise" of neoliberalism:

This naturalization of market logic (or "values," to use de Angelis' language) was nothing more than a spell. This spell was broken in 2008, a year after The Beginning of History was published.
The point of all this: When I argue that we now live in a post-neoliberal world, I do not mean that its practices or program have ceased (Ireland, Greece, and Portugal make it loud and clear that it's alive and kicking), but that the narrative of the market's universality is no longer unchallenged. The market is not the one and all; it has an outside, it has a limit.

I read that and thought: That writer sounds very familiar. I looked in the book's notes and found my name. The quote came from here.


Two things: Even though I'm used as an example of how not to think about neoliberalism, I'm happy that at least one person reads my posts on economics. Two, it is an honor to be listed next to Joseph Stiglitz. What Stiglitz wrote:

Neo-liberal market fundamentalism was always a political doctrine serving certain interests. It was never supported by economic theory. Nor, it should now be clear, is it supported by historical experience. Learning this lesson may be the silver lining in the cloud now hanging over the global economy.

In a nutshell, my day is made. (My review of Mirowski's book will appear in the near future.)
Comments 11
Tags: Blogs Economy