Russia Moves to Take Children From Gay and Lesbian Parents 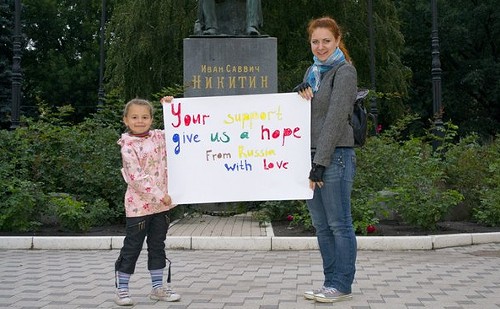 Yesterday Vladimir Putin told the AP that Russia doesn't discriminate against "these people"—against gays and lesbians—heck, he sometimes gives "state prizes or decorations" to them. Today we find out that Russian lawmakers are moving to take something from gays and lesbians: their children:

Lawmaker Alexei Zhuravlev has proposed a bill that will would deny gay parents custody over their own children. If passed it would make “non traditional sexual orientation” a basis for the deprivation of parental rights. It places same-sex sexual orientation in the same category as alcohol and drug abuse. If passed the law would follow on from a piece of legislation signed into law by President Putin in July that banned gay and lesbian couples from foreign countries from adopting children.

Zhuravlev told the Associated Press that "homosexual 'propaganda' had to be banned not only in the public space 'but also in the family.'"

Journalist Masha Gessen was right to flee Russia with her partner and their children. But not everyone can get out.

Maybe now we can talk seriously about moving the Olympics?

Comments 32
Tags: Blogs LGBTQITSLFA
The Stranger depends on your continuing support to provide articles like this one. In return, we pledge our ongoing commitment to truthful, progressive journalism and serving our community. So if you’re able, please consider a small recurring contribution. Thank you—you are appreciated!
CONTRIBUTE NOW