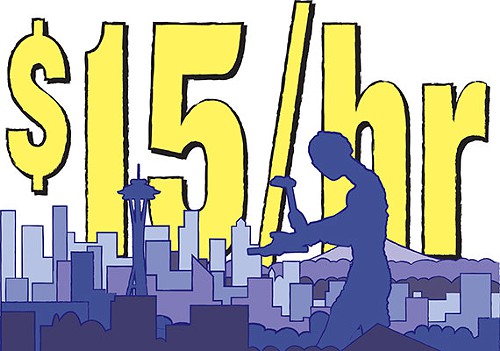 One way or another, Seattle voters will be asked to approve a $15-an-hour minimum wage next November. And the whole nation will be watching. "There is a lot of momentum," says Seattle City Council member-elect Kshama Sawant in the wake of her stunning come-from-behind victory over incumbent Richard Conlin. An avowed socialist, Sawant made a $15 minimum wage the centerpiece of her campaign, and it is fair to argue that Sawant's surprising victory was at least in part a proxy vote on her signature issue: "We are in a position to get something in 2014," Sawant predicts, "because the [$15 minimum wage] issue is so alive in people's minds."

SEIU 775NW president David Rolf agrees. "We are going to see something happen in Seattle," says Rolf, whose union spearheaded the efforts to successfully pass SeaTac's historic Proposition 1, an initiative that guarantees a $15 minimum wage and other benefits to thousands of airport and hospitality workers.

Although SeaTac Prop 1 still faces a series of legal challenges, its victory at the polls, combined with Sawant's council win, makes Seattle the obvious next battleground in the fight for a living wage. (The SeaTac battle also demonstrates the high stakes: The airline, hotel, restaurant, and car rental industries spent about $200 per vote opposing Prop 1—that's equivalent to spending $40 million to sway an electorate the size of Seattle's.) As Rolf puts it, "I don't think at this point we could hold back a debate in 2014 if we wanted to."

It will be a two-front war—both at city hall and at the ballot box—a strategy intended to force minimum wage opponents to sue for peace in the council in order to avoid a more devastating defeat at the polls.

Leading the charge at city hall could be mayor-elect Ed Murray, who embraced the $15-minimum-wage issue mid-campaign and has publicly promised swift action. "We'll begin our process immediately," Murray tells The Stranger. "We're having our discussions in the transition team already."

Tags: Blogs Politics
The Stranger depends on your continuing support to provide articles like this one. In return, we pledge our ongoing commitment to truthful, progressive journalism and serving our community. So if you’re able, please consider a small recurring contribution. Thank you—you are appreciated!
CONTRIBUTE NOW