How Privilege Protects You

Last week, Grantland writer Caleb Hannan outed Essay Anne “Dr. V” Vanderbilt, the transgender subject of his story, in the course of reporting about the golf club she invented. Dr. V committed suicide in October—while Hannan was working on the piece about her that she was begging him not to write—and people have been asking how a story as dangerous, disrespectful, and callous as this was published by Grantland at all. Bill Simmons, Grantland’s editor-in-chief, posted an apology letter five days later. ESPN writer Christina Kahrle, a transgender woman, wrote about what Grantland got wrong. But what about privilege?

One of the premises of the piece seems to be that Hannan is “normal” and other people, like Dr. V, are not, and that’s where the glimmer of privilege slips in. This story is as much about Hannan’s ignorance as Dr. V’s duplicity—her being transgender was so foreign and unbelievable to him that it consumed the narrative. Choosing to conceal your gender identity is not duplicitous, but the story he was uncovering about her shady business background totally was, and, as a person with evidently no training around or interest in gender identity issues, he conflated the two to a disastrous degree. Hannan already portrayed Dr. V as other by using language “mad scientist” to describe her and questioning what he classified as the strangeness of her deep voice; he sort of showed his hand when he said that a “chill ran up his spine” when he realized Dr. V was transgender. Grantland editor Simmons also uses Dr. V’s “quirkiness” as a defense of Hannan, like we’re all supposed to understand that she was essentially different. And then Hannan went so far as to refer to his story as a eulogy, which is laughably untrue. (Look up "eulogy.") Hannan's privilege is on overdrive in this story—he’s the focal point, his feelings are what matter most, words mean whatever he wants them to, and ignorance trumps his willingness to protect his subject.

In Simmons’ letter, he admits that there were a few points where the story almost wasn’t published—after the first draft was submitted, when it ended abruptly because Dr. V stopped talking to Hannan, and then again after Dr. V committed suicide—and that the story really took shape when Hannan was pushed by editors to keep reporting on the discrepancies in Dr. V’s background, most of which seemed to be intentionally obscured to protect her status as a transgender woman who did not want to reveal that information to the golf community she worked in, and certainly not to the world. Even though Dr. V and Hannan had an agreement to focus on the science and not the scientist, Hannan proceeded with what seemed like the nugget of the story to him, in apparent violation of their agreement, incorrectly tying her transgender identity together with deceit. It wasn’t just part of the story—Hannan’s seeming discomfort with and astonishment at someone being transgender was the story.

Hannan is reportedly no stranger to lazy reporting and ignorance, but what really strikes me here is how his privilege as a straight white male in a world largely dominated by straight white males (golf) contributed largely to his inability to find out more about a subject he clearly knew nothing about, and that it passed through 13 to 15 editors without anyone stopping to ask if they needed to give this a closer look. Simmons’ letter asks us to blame him instead of Hannan, telling us that it’s a mistake to focus our criticism on the writer instead of Grantland. We should blame Grantland, not Hannan, Simmons says. Can’t we do both? And shouldn’t we? Hannan is guilty of ignorance, but his Twitter activity proves that it’s a willful ignorance, that he really doesn’t understand the scope of what he’s done, that he evidently doesn't feel he has any responsibility to amend what he's done as he jokes around about death threats:

And actively blocks anyone who challenges or questions him:

And then, for at least one day, announces he's not blocking people: 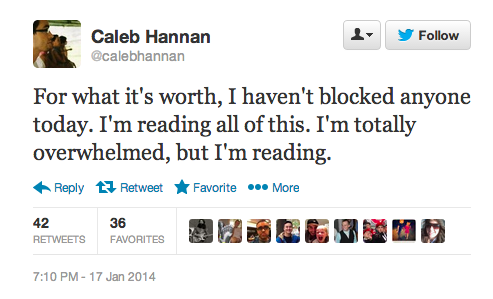 Let’s not ignore the privilege of Bill Simmons, either. In his apology, he acknowledges that he hasn’t had enough training in transgender issues and that he read this story a certain way because of his own experiences in life, and seeing that admission is great. But he quickly goes on to say that he found the behavior of people tormenting Hannan to be sobering and unconscionable, words he never used to describe the laziness and irresponsibility of his own writer. Of course Simmons wants the attention on himself. Protected by parent company ESPN and identifying himself as someone in a position of power within that company ("It's my site"), he seems to operate with the privilege of belonging to a corporation, a HUGE corporation that can take the hit of this one little story about a transgender woman that they fucked up majorly. They can take the hit because they dominate so thoroughly (and financially) in other ways. This deflection not only removes the responsibility from Hannan, but also, in part, from Simmons, who really has nothing to lose.

And let’s not forget that Hannan has yet to apologize. It doesn’t make me feel good to see that Grantland seems to operate on a case-by-case basis when it comes to educating themselves about issues of diversity, and I can’t comfortably explain it away with “Oh well, they’re trying.” Simmons fell on the sword pretty hard, but in such a way as to simultaneously admit his part in this and effectively shut down any more critics, instead of creating a space for discussion or hearing more from the community of people he hurt. And that’s a pretty typical response from straight white dudes in positions of great power—I did this one thing, isn’t that enough? What more do you want from me?

I reached out to Hannan for his thoughts, but he didn’t get back to me. Lots of people came to Hannan’s defense, some even referring to his detractors as a mob. For his part, Hannan seems to be treating this lightly at best, and, judging by his Twitter feed, he's thankful for any positive feedback while ignoring the negative. And I think that’s what bothers me most of all—that his ignorance won’t damage him, that he can keep operating in a world that validates it.

Comments 100
Tags: Blogs ??!!
The Stranger depends on your continuing support to provide articles like this one. In return, we pledge our ongoing commitment to truthful, progressive journalism and serving our community. So if you’re able, please consider a small recurring contribution. Thank you—you are appreciated!
CONTRIBUTE NOW